Iran outshone Mongolia in a tight four-set duel for the 9th Asian Youth Girls’ Championship. Iran’s Talebi surged with a game-high of 23 points. Read the latest news from volleyball world on worldofvolley.com. 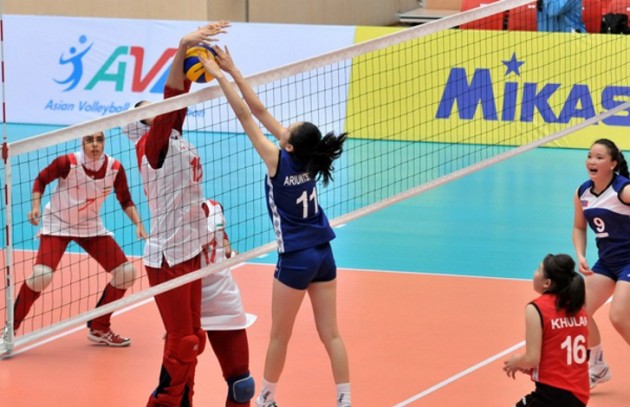 Iran used their kills at the left side to power towards an advantage in the first set. Mongolia was able to keep  up with Iran’s pace, inching close enough within two points.  Coach Dagvado Erdenechuluun sent bench player Uranzaya Munkgjargal, whose service helped sustain this momentum. Later, Iran resumed their firepower from the left to end the opening set with victory on their favour.

Mongolia tried to improve their attacks in the next set, utilising Ariuntsetseg Tungalagtamir as a primary offensive option. Iran then varied their plays to outsmart the opponents with dropped spikes. While Mongolia retaliated with defence on their floor, Iran’s Talebi went for a power kill to punctuate the second set.

Iran lagged behind in the succeeding set, giving away points due to their errors. Mongolia, on the other hand, had a renewed variation in their offense, as setter Khosbayar Lhkagadorj even scored some points with her attacks. They also performed better from the service area, which gave them the opportunity to extend the match.

The Mongolian girls played with all their might in the fourth set, challenging the firepower of the Iranians and keeping a tight race.  They came to a rally of points and held service even when Iran was already at match point. Their fateful play came when they were not able to sustain the floor defence against the opponents’ smart attacks.

Iran’s Talebi surged with a game-high of 23 points, with Amini also contributing 22 markers.

Iran’s victory will now place them in a duel against Vietnam on Friday, October 19, to contest the 9th overall ranking in the tournament.