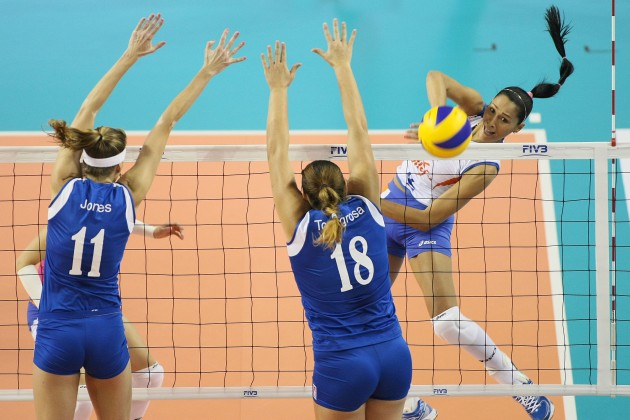 It is the second time Sollys will be playing for the title of the annual club event after losing to Fenerbahce of Turkey in 2010. Last year they finished third, the first time a Brazilian women’s club didn’t figure in the finals.

Coaches from both sides gave playing opportunities to each one of his players during the lopsided match. The winners led 8-6 in blocks and 8-2 in aces.

Sollys Nestle took an 8-6 lead with Menezes contributing with two blocks. Rosa’s spikes kept Puerto Rico close at 9-8. Fernanda gave Sollys a four-point margin at 14-10 but Torregrosa hit a strong kill against Sollys’ wall. Jaqueline blocked Torregrosa for a 16-11 difference in favor of Sollys at the second TTO. The Brazilian club put together a five-point rally to build a comfortable gap at 21-11. Rosa and Del Valle scored consecutive points for Lancheras. Jaqueline served an ace for set point 24-15 and Sollys won 25-15 when Mariel Medina netted her soft attack.

Menezes scored her second ace for a 7-3 margin of Sollys Nestle and Puerto Rico’s club called for time-out. Sheilla Castro scored with a right-hander tip for the 8-3 lead. Jaqueline landed an ace and Fabiola blocked for a 14-5 advantage when Lancheras called time-out again. Adenizia Silva’s kill down the middle put Sollys way in front 16-6 at the second TTO. Sollys closed the set 25-13 with a cross court spike by Ivna Marra.

Sollys Nestle was quickly in front 4-0 forcing a time-out of Lancheras. The score was 8-2 at the first technical stop. Lancheras cut the distance to 10-7 with a spike of Rosa and the block by Jones. Marra hit a solid kill and Sollys led 16-12 at the second TTO. Marra continued with her strong offense to increase the distance to 20-12. Oliveira came off the bench to score and serve two more points for the Brazilian side. Marra planted a bomb from the right side for set point 24-14. Sollys won 25-15.