The team captain of ACH Volley Andrej Flajs, his counterpart for Generali UNTERHACHING Christian Dünnes and the two respective head coaches, Luka Slabe and Mihai Paduretu, discussed their expectations before the coming match whereby they open their quest for European glory. 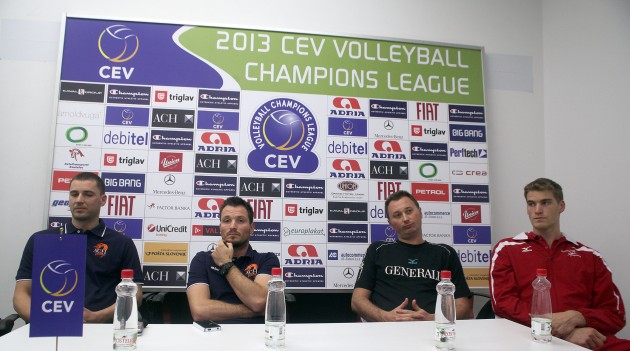 Christian Dünnes, captain of Generali UNTERHACHING, stressed out the importance of this clash: “The match against ACH Volley will be very important for the remainder of the season. Lube Banca Marche MACERATA is the favorite of the group which means we have to look for our chances in the matches against ACH Volley. Euphony ASSE-LENNIK has a good team, but many important players left this club after last year’s season”.

Andrej Flajs, captain of ACH Volley, thinks this will be a different start of the European campaign for his side than in the past. “Usually, we play our first match away. I think Generali is a good team with excellent players, but so is ACH Volley as well. The atmosphere in the team is excellent and I believe we can achieve what we set out to do this season”. Flajs added he would be disappointed if the team wouldn’t make it to the next round.

Mihai Paduretu, head coach of Geneali UNTERHACHING, said: “I believe this will be a difficult match because ACH Volley is a very experienced team with players who also play for the national team. I think that both teams have a chance of beating Lube Banca Marche MACERATA if they have a good day. We above all want to enjoy the match and may the better team win”.

Luka Slabe, head coach of ACH Volley, also feels the Italian team is the favorite in Pool D, but he also stresses that this is just the beginning of the season. “We still have to play five more matches. Whoever wins tomorrow isn’t automatically through to the next round, the season is long. The team which is better prepared will win. I especially want to see many fans on the tribunes to support the team because they represent our added value”.