ACH Volley LJUBLJANA lost a home match against Generali UNTERHACHING from Germany with 2:3 in preliminary Pool B of the CEV Volleyball Champions League. Read more about latest volleyball news, games reports, and statistics on WorldofVolley. 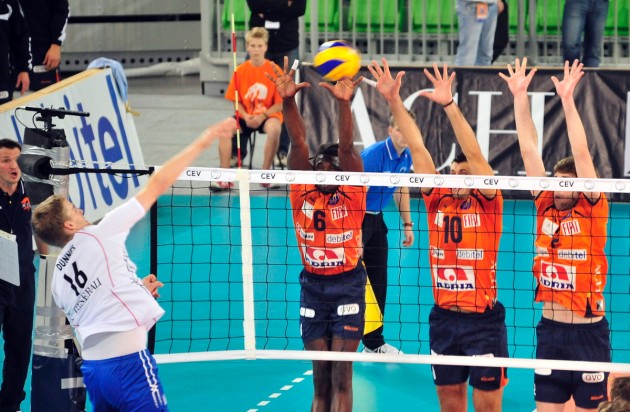 In the first minutes of the match the guests had a slight advantage but quickly the Slovenian team took the lead. After the first technical time-out ACH Volley cruised ahead and the guests were forced to take a time-out at 12:8 and 15:9. This did not help them get into their rhythm, allowing the home team to only increase its lead and win the first set (25-19).

The start of the second set was in favor of ACH Volley. By the first technical time-out the home team had claimed a five-point lead but the German team quickly caught up, making the game more interesting and after the second technical time-out the guests took the lead for the first time thanks to their opposite Christian Dünnes. Alexander Shafranovich’s serves kept them in the lead and Roy Friedrich finally sealed the deal (22-25).

The third set did not let any team breathe easy as the teams kept exchanging the lead and never let the rivals escape by more than a point. In the end it was Generali that won the set with a very slim margin (23-25).

ACH Volley’s players were not ready to surrender and went to the first technical time-out in set four with a two-point lead. They successfully kept control of the game, increased their margin until the end of the set (25-19), leaving it to the fifth set to reveal the winner of this clash. The guests from Germany started the final set with real determination, went to the front by the technical time-out. Afterwards ACH Volley managed to catch up but in the exciting finale the home team attacked poorly, giving UNTERHACHING the opportunity to win the set and match.

According to the Slovenian coach Luka Slabe this was a game of lost opportunities: “We lost the game due to little, stupid mistakes, which cannot happen again and hopefully we will learn from this experience”.

Generali coach Mihai Paduretu was very proud of his team for not giving up and for fighting in the second set, which was one the deciding points of tonight’s match: “Even only for their determination my players deserved to win”.