Zaksa KEDZIERZYN-KOZLE claimed on Tuesday a second win in the prelims of the 2013 CEV Volleyball Champions League, this time by edging Crvena Zvezda BEOGRAD in straight sets. Read latest volleyball news on Worldofvolley.com. 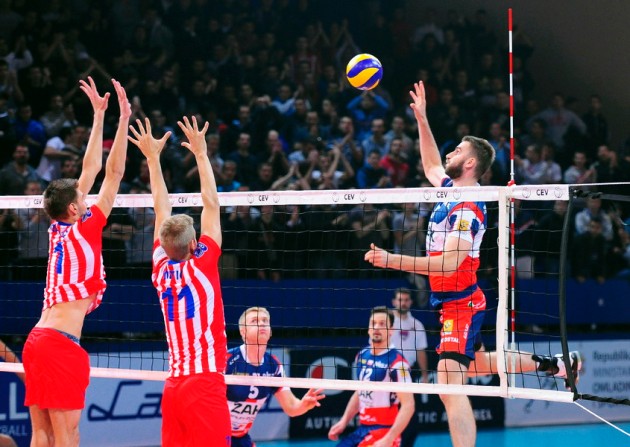 Zaksa immediately imposed their quality in the opening set going up 12:8 by exploiting also the numerous mistakes committed by the hosts in attack and reception. The Polish team was well anchored by French spiker Antonin Rouzier and Brazilian Luis Felipe Marques Fonteles, thereby quickly cruising to the final 25-18.

Rouzier and Fonteles contributed an 8:3 lead in the second set for Zaksa and having to cope with the same problems showed in the first set Crvena Zvezda was not able to come any closer. Their head coach Dusko Nikolic changed setter and outside hitters but without any real impact on the plot of the game. Zaksa went to the front 15:10 and 23:15 scoring some more points to bring it home with the score of 25-15.

The third set started with a good run by the home team (5:2, 7:2) marshaled by Dusan Petkovic and Lazar Koprivica but the guests got back on track and with their perfect blocks and spikes could flip the charts around going up 16:13 by the second technical time-out. Crvena Zvezda was trying to find a way to stop the Polish attacks but could not achieve this goal and the game ended in a 0:3 defeat.

Antonin Rouzier top scored with 19 points well supported by Michal Ruciak and Marcin Mozdzonek with 9 and 8 respectively. Dusan Petkovic totaled 12 for the home side with Nemanja Jakovljevic chipping in with 8.

“If you have seen the quality of their roster and the way they served, you realize it was unrealistic for us to cause a surprise tonight. We have a young team, maybe too young for this arena and we had problems with our reception, so at a certain point we played with four receivers but still could not control their serve” says Dusko Nikolic, the home mentor.

“Ups and downs and mistakes are understandable for a young and inexperienced side like the Serbian team but still they showed some quality. They have a few guys with the potential to become great players. I am happy that we travel back home with three points” adds Daniel Castellani, the head coach of Zaksa KEDZIERZYN-KOZLE.