ASPTT MULHOUSE home win 3:1 against Dinamo Romprest BUCURESTI in the second round of action for the prelims of the 2013 CEV Volleyball Champions League. Read more about latest volleyball news, games reports, and statistics on WorldofVolley. 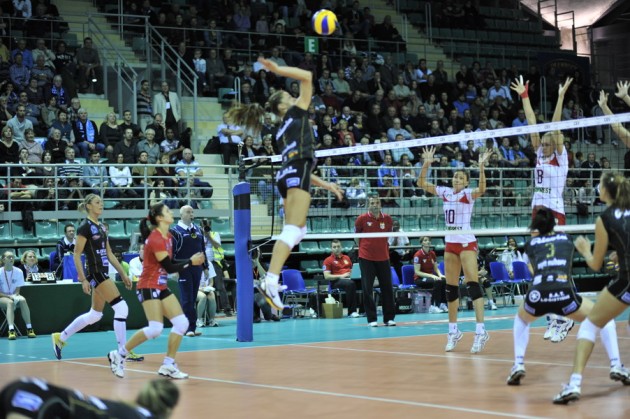 As these teams had lost their opening match in Pool C they evidently wanted to seize their first positive result in the competition; the local heroines started out with a very good pace (8:3) but afterwards Regan Hood was able to cause some problems to their defense with some excellent serves. However, with Tatjana Bokan and Alexia Djilali standing out in offense, MULHOUSE got back on track (16:11) but the guests from Romania did not surrender as they eventually closed the gap to -1 (23:22) once again via Hood and their captain Alida Marcovici. The set eventually ended at 25-23 as a fault was whistled to Dinamo.

ASPTT MULHOUSE repeated that same performance in the second set going up 8:3 and 16:6, and even though Hood and Ioana Maria Baciu attempted a comeback for Dinamo, the set was sealed by home captain Anna Rybaczewski with the massive score of 25-12.

Regan Hood powered a good start for Dinamo Romprest in set 3 (8:4) but anchored by Bokan, the home side stormed back to draw level at 12. Bokan even paved the way for the provisional 16:13 at the second technical time-out but BUCURESTI fought back and eventually claimed that section of the game (23-25) via the contribution of Hood, Marcovici, Diana-Dora Carbuneanu and Tatiana Lupu.

Dinamo Romprest stretched that momentum to the early phases of the fourth set (2:6) but with Rybaczewski on fire, MULHOUSE fought back to level at 6. ASPTT MULHOUSE gradually was able to impose their pace (16:10) and every single player of the home side got the chance to play – including Isaline Sager-Weider and Delphine Nercher – with Alina Albu-Ilie pocketing the final 25-15 and 3:1.

The charts of the best scorers were eventually topped by Regan Hood and Tatjana Bokan with 25 and 23 points respectively.