Destinee Hooker has been named the USA Volleyball Indoor Female Athlete of the Year for 2012. Kristin Richards Hildebrand, an alternate on both the 2008 and 2012 U.S. Olympic Women's Volleyball Teams, was selected as Most Improved Player of the year. 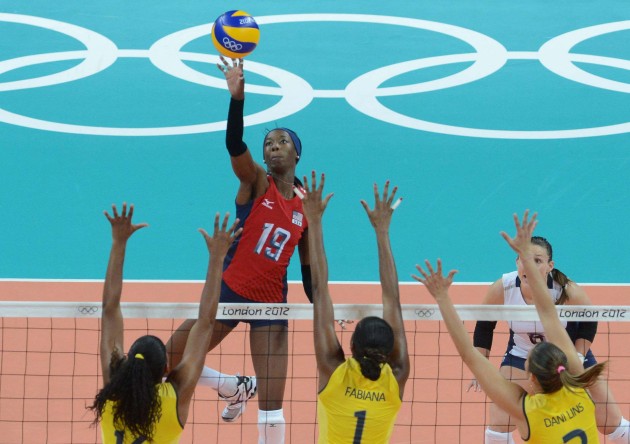 They finished with a 7-1 record, losing only to Brazil in the gold-medal match. Hooker earned the Olympic Games Best Spiker award with a 0.379 hitting efficiency. Hooker also ranked as the second best scorer at the Olympics with 161 points, averaging 5.96 points per set and starting all 27 sets. She added 0.78 blocks per set at the Olympics to finish as the fourth best blocker.

Although she was injured through much of the 2012 FIVB World Grand Prix, Hooker was dominant for the brief time she was on court. She scored 101 points in her six games.

Meanwhile, Kristin Richards Hildebrand, an alternate on both the 2008 and 2012 U.S. Olympic Women’s Volleyball Teams, was selected as Most Improved Player of the year.

During the FIVB World Grand Prix, Richards Hildebrand started four of the five Final Round matches in addition to two of the three matches in the third preliminary round weekend. Richards Hildebrand averaged 3.57 points per set during the World Grand Prix. She was named the most valuable player of the 2012 Pan American Cup after helping the U.S. claim the gold medal for the first time since 2003. In the gold-medal match against Brazil‘s Olympic-laden team, Richards Hildebrand scored a season-high 35 points with 32 kills, two aces and a block to finish the tournament as the Best Scorer with 128 points.

Sollys Nestlé and Trentino Diatec both lead their national leagues