On Thursday Atom Trefl SOPOT lost in straight sets to Vakifbank ISTANBUL of Turkey thereby missing out on a spot in the Playoffs 6 of the 2013 CEV Volleyball Champions League – Women. Poland’s remaining representatives in the competition, Tauron MKS DABROWA GORNICZA and Bank BPS Fakro MUSZYNA, had ended up in third place being moved to the Challenge Round of the CEV Volleyball Cup. 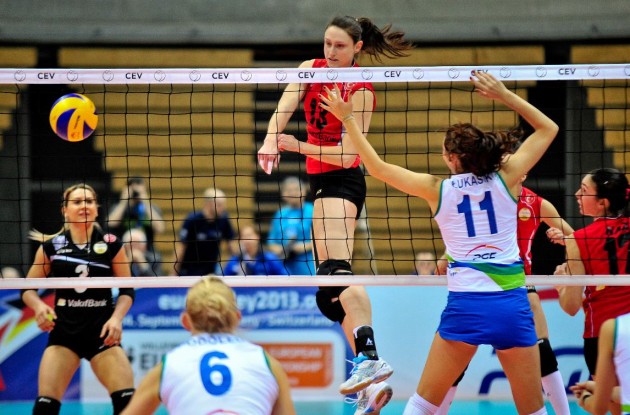 Atom was the only team from Poland – out of three – that had made it to the Playoffs 12 after finishing second in prelim Pool B via a memorable home victory over Asystel Carnaghi VILLA CORTESE of Italy. Poland’s remaining representatives in the competition, Tauron MKS DABROWA GORNICZA and Bank BPS Fakro MUSZYNA, had ended up in third place being moved to the Challenge Round of the CEV Volleyball Cup.

In the Playoffs 12 Atom Trefl got to play one of the most serious contenders for the crown, i.e. Vakifbank ISTANBUL. The Turks first edged Atom Trefl in Poland (3:1) and then continued their winning march by claiming a splendid home win in straight sets. Still SOPOT was very close to win at least the second set.

“We should have won that set and then we’d have put some pressure on Vakifbank. We should have played more aggressively but we didn’t. It was a very close game, sometimes we played quite well but Vakifbank definitely was the better side” says Atom Trefl head coach Adam Grabowski. “In the other two sets our opponents broke away quite early and imposed their supremacy. Our block was not very good and we did not play with the necessary accuracy” continues the Polish mentor.

The group will get back home on Friday night to play on Sunday the next match scheduled for the national league taking there on Palac BYDGOSZCZ.

How to Stretch – Stretching Basics