Last week Poland’s Delecta BYDGOSZCZ was edged in straight sets by Serbia’s Radnicki KRAGUJEVAC in the first fixture scheduled for the 1/4 finals of the 2013 CEV Volleyball Challenge Cup. You can read all relevant news from volleyball world on Worldofvolley.com. 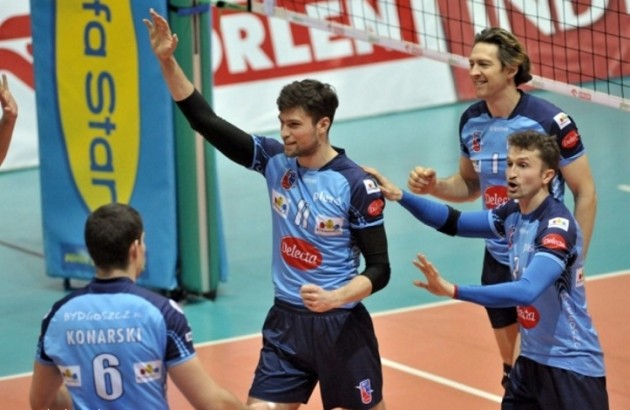 The best players had stayed in Poland under the leadership of head coach Piotr Makowski to prepare for an extremely important domestic game and to recover from minor injuries. Two quite experienced players, Piotr Lipinski and Tomasz Wieczorek, went to Serbia together with the youngsters of the group and assistant coach Marian Kardas. They fought bravely but ultimately their opponents from Serbia had the upper hand in straight sets.

To make it to the semis Delecta BYDGOSZCZ needs now to win the return match coming up on Wednesday and then also the eventual golden set. For this clash Delecta will be lining up its best starting six and despite last week’s defeat in Serbia the home side remains the heavy favorite to get the ticket to the next round. “We definitely want to win and hope to achieve our goal” Wieczorek says. For the first time in their history the players representing the club from the city situated on the banks of the Brda River are topping the charts of the national league, a first place that was confirmed this past weekend via an away victory over Indykpol AZS OLSZTYN.

Lukasz Owczarz paced Delecta in Serbia by scoring 14 points, the same tally registered by Nemanja Radovic and Nemanja Stevanovic of Radnicki KRAGUJEVAC. This time Stéphane Antiga & Co. will try to impose their experience and quality on the game against the young guys from Serbia.