"I am very happy that we won the third meeting. Match was not easy, especially in the second set" said the Bank BPS Fakro MUSZYNA captain Aleksandra Jagielo. Her team advanced to the semifinals. This and other volleyball news read on Worldofvolley.com. 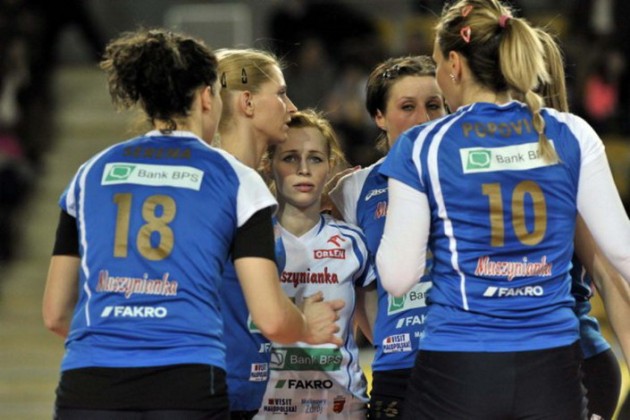 Aleksandra Jagielo (Bank BPS Fakro MUSZYNA captain): “I am delighted that we won the third meeting, which was not easy. In the second set Palac Bydgoszcz blocked great and we did not know how to deal with the adoption and attack. We are pleased that we are already in the top four. Now we will focus on another rival”.

Magdalena Mazurek (KS Palac Bydgoszcz captain): “I congratulate to MUSZYNA. In the second set we gambit with service which resulted with a good block. If we maintained these elements game could be different.”

Bogdan Serwinski (Bank BPS Fakro MUSZYNA coach): “I can only confirm what Aleksandra said. We are very happy that we are in the top four. It’s holidays soon and we need a moment of breath. Girls will have three days off. On Monday, back to work. I look at the statistics of this meeting, at least in terms of your team it looks very well. It seemed to me that we play poorly but all turned out well. We scored 17 points in block. I can be happy.”

Rafal Gasior (KS Palac Bydgoszcz coach): “We can be pleased with our attitude. We take the fight, as always, and we wanted to show our best side. The first three sets were filled with a large number of exchanges, it was such a typical volleyball battle. Muszyna was the favorite of the meeting, but I think we played a good game. I need to thank to our fans.”