EYOF W: Poland came back from 2 sets down vs. Serbia 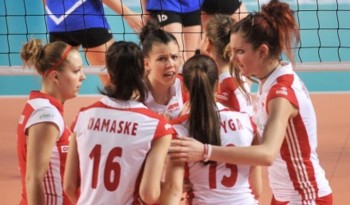 Malwina Smarzek (last on the right) best scorer against Serbia

Serbia is nevertheless still ranked second in the group with 4 points, with Poland in third place (2) and Greece at the bottom of the charts (0).

In the other game of the day, the Dutch girls continued to shine. After downing 2013 European champions Poland on Monday, the local heroines extended their winning streak coming back from one set down in their fixture with Greece to finish it off with a 3:1 (14-25, 25-9, 26-24, and 26-24) and keep the leadership in Pool A with 6 points.

Jasper was the most efficiant for the hosts with 14, while Greeks, Anthi Vasilantonaki and Olga Strantzali scored 18 each.

After beating Turkey on Monday, Slovenia claimed a second victory this time by besting Germany at the tie-break. Slovenia could not capitalize on a 2:0 lead and had to stand Germany’s furious comeback before bringing it home at the tie-breaker (25-20, 25-17, 20-25, 18-25, and 15-10).

Slovenia currently tops the charts of the group with 5 points followed by Germany with 4, with pre-favorites Italy and Turkey rounding out the table with 3 and 0 respectively.