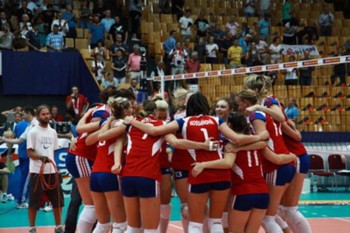 In the first set the team from the Czech Republic took the first lead (6-3) taking advantage of quite nervous Polish players who had a few unforced errors early. Throughout the entire set the Czech ladies kept a small lead of not more than 3 points.

However, in crunch time of the first set Poland turned the tables taking its first lead at 22-23 winning the set in 29 minutes 24-26. The Czech team struggled late in the set, especially in defensive play. Andrea Kossanyiova (CZE) was the leading scorer with 6 points.

The second set started with a small margin of error on both sides. Both attacking players of Poland and the Czech Republic dominated this phase of the game with well placed spikes. At the first technical time out Poland was trailing its opponent by only one point (8-7). During this stage of the set no team could extend their lead until Czech’s Kossanyiova finished a well set ball to 18-16. The game stayed close until the end of the set when the Czech team took a 2-point lead (23-21) putting a lot of pressure on the Polish team. The Czech Republic finished strongly winning the second set 25-21 tying the game 1-1.

Poland started better into the third set taking the early lead (1-3) but the Czech team fought back keeping the game close at the first technical time out (8-7). After the time out the Czech ladies extended their lead with powerful offence, especially by their wing-spikers leading 16-11 at the second technical time out. Poland could not find a way to stop the good Czech offence, consequently the Czech team grabbed the third set (25-21). Michaela Monzoni (CZE) became the key player for her team with 6 points.

Like the previous sets both teams were facing each other on an equal level with some advantages on the Czech side, leading at the first technical time out (8-6). After exhausting long rallies the better end was mostly on the Czech side leading by 5 points later in the set (19-14). Poland could close the gap and even turned the set around with a great fighting spirit to win it with their first set point (24-26).

Tie break play stayed as close as the rest of the match until the Czech block accelerated in the end to grab the win after a marvellous marathon match (15-12).