Karolina Różycka, the receiver of the Polish national team will play in the upcoming season in Muszynianka Muszyna, team coach Bogdan Serwiński told to the Polish media. 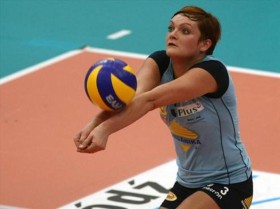 Coach of the third team in the last season’s ORLEN League said that all formal issues will be taken care of at the beginning of next week. However, the player will defend Muszynianka colors on at least two games in the tournament in Jarocin.

During the event in Wielkopolska region, which will be held this weekend, players led by Serwiński will face teams of PTPS Piła, Pałac Bydgoszcz (Saturday) and Aluprof Bielsko-Biała (Sunday).

Różycka, until recently known to the fans under the last name Kosek, returns to her homeland.

A 28-year-old player started her career in the native city of Myslenice, in the local team of Dalin.

She spent last season in Turkey, defending the colors of Yeşilyurt İstanbul who ended ninth in Turkish Division 1.