Sebastian Swiderski, Polish hitter, born in 1977, played in Italy for Perugia and Macerata. He retired as a volleyball player in order to start a new carrier as a coach. 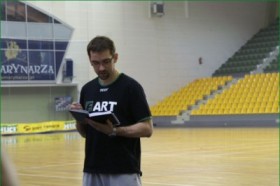 Since yesterday, he is the new coach of Fart Kielce. That team is currently competing in the playoffs of Polish league and has the score of 2:0  in the series after the quarterfinals against Kedzierzyn, the team Swiderski left yesterday.

Champions League: Mr Meyer, what is going on !?