Champions League: Mr Meyer, what is going on !?

This weekend we will be witnesses of the most important and the most prestigious volleyball event this spring. Four top European clubs will play for the title of the best team on the continent and for ... ridiculously low financial rewards. Perhaps, it may be the last season in such a formula because some teams are able to announce the protest against bad CEV policy. 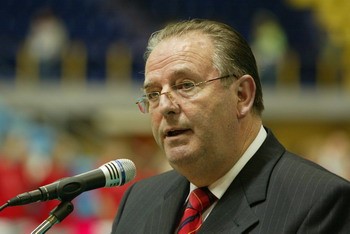 No profits, financial wastage’s participating teams, strange selection of teams receiving “wilds cards”. This is the reality in elite volleyball Champions League. Unfortunately, it appears that little will change. CEV authorities were compromised once again, and if there will be no revolution, the most important club trophy may disappear.

This worrying situation in European Confederation has been confirmed by lack of willing to host Final Four. Just a few hours before the draw of Champions League play-offs, activists of the European Volleyball Confederation did not know who will be the final tournament organizer. There were no willing and then came to help the Poles.

PGE Skra lent them a helping hand, but the whole volleyball Europe once again saw that active members from Luxembourg have not the proper idea what to do with dying competitions. The Poles have an idea, but they need to carry out the revolution: “We are concerned about a United European league, which would unify ten, maybe sixteen strongest teams. Such an event would have to have a completely different funding. Then, it would be the opportunity to create a luxury product which would promote volleyball in Europe and develop that until the volleyball popularity will catch up basketball or football. It would be the peak of our dreams” – Miroslaw Przedpelski CEV vice-president said.

Not only in Poland the situation has been seen, but Italian also observed the problem: “Such a united league is one possible solution, because Champions League does several steps back every year. What is more, the other European cups (CEV Cup and Challenge Cup) also are worse and worse. It is not good when such a great team like Casa Modena do not want to play there and simply give up. We have to pass new law and change the reality” – Giuseppe Cormio the general manager of Trentino Volley said.

Outrage of club’s managers should not be surprising. Until teams will earn for participation in European Cups and will not be supported by CEV, everybody will protest against this policy. The question is where are money generated by actual competition, because somebody must earn. But who?

CEV CUP M: CZESTOCHOWA to lie down foundations for a possible all Polish final