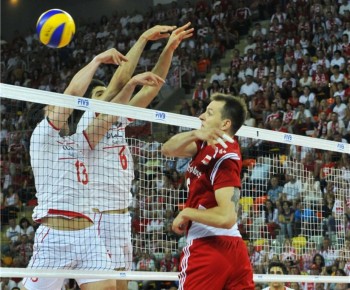 After the opening win against Japan, Poland managed to outplay Iran as well at the Hubert Wagner memorial tournament 2015, and therefore to remain the only perfect team on the standings after the second day. In the game between two big rivals, Poland defeated Iran by 3-1 (25:23, 18:25, 25:15, 25:20) mostly thanks to great performance of two big volleyball stars – Michal Kubiak and Bartosz Kurek.

Kurek and Kubiak scored 17 points each for the red and whites while they had a great help from Rafal Buszek who added 14. On the other side, Amir Ghafour scored 14 points for Iran but that was simply not enough.

We have written that Poland is now the only team with the perfect score at the tournament, and that is because Japan stunned France! Kunihiro Shimizu and Co. outplayed the reigning World League winners in four sets – 3-1 (20:25, 25:21, 25:21, 25:19).

So, the game between Poland and France on the last day of the tournament will be actually the finals. The hosts need at least two sets to win the trophy, but if France wins the game by 3-0 or 3-1 then the trophy will belong to Les Blues.

WC W: Oh, do not give Ognjenović so much time (VIDEO)

ITA M: Only four players to start preparations in Perugia