POL M: Whoever says Kurek can’t play as outside-hitter should watch this video

Bartosz Kurek was the MVP of the big derby between Lotos Trefl Gdansk and PGE Skra Belchatow, even though did not play on his primary position... 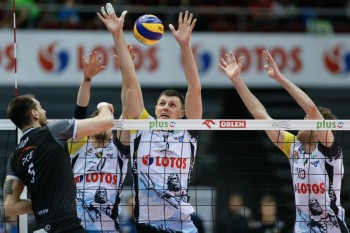 PGE Skra Belchatow head coach Philippe Blain has had a difficult decision in front of every match in the 2016/17 season – Mariusz Wlazly or Bartosz Kurek? Both of them are playing as opposites, both of them are true volleyball stars.

Still, since the problems Kurek had before the start of the season, it was Wlazly who was usually starting the games, while Kurek would come in as substitution. But, this weekend, Blain decided to put both of them on court at the same time!

Blain put Wlazly on the opposite position, while he placed Kurek on the position of outside-hitter. And it was a perfect decision.

Although people have been talking that Kurek simply can’t play as outside-hitter, he proved them wrong with outstanding display. Bartosz scored 19 points, had 62% rate in attack, while he was eventually chosen as the MVP of the match!

Take a look at some of his highlights from this game by following this LINK.

CHN M: Did anyone doubt on this outcome? Beijing and Shanghai superiorly advance in playoff finals