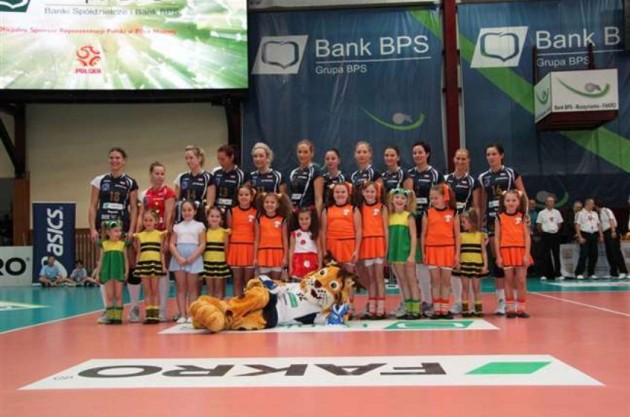 The players were officially presented to the fans and the media accompanied on stage by little girls dressed as bees, frogs and ladybirds.

“This was an acknowledgement by the CEV that our club is strong and we deserved to be given this opportunity” adds head coach Serwinski. “Our goal is to stay focused and bring it home any time we step onto the field of play. As for the Champions League, we will know more about our real chances after playing the main favorite of our group, Dinamo MOSCOW, right in the first leg”.

The group has undergone major changes with a total of 7 players contracted for this season plus Aleksandra Jagielo coming back after one year off due to maternity leave. Anna Kaczmar, Eleonora Dziekiewicz, Dominika Sieradzan, Paulina Maj and Hélène Rousseaux were all already known in Muszyna for they had already played in Poland’s national league while Sanja Popovic and Valentina Serena are totally new faces for the local fans.

“Sanja has got dynamite in her hands, she is really strong” comments Jagielo about the Croatian opposite. “I know also the rest of our new players, including Valentina Serena that I got to know while playing in Italy”. Before the start of the season, MUSZYNA tested out its skills and shape by playing another CL competitor, Czech champion Agel PROSTEJOV.