Omichka OMSK REGION qualified on Wednesday for the semifinals of the 2013 CEV Volleyball Cup – Women, something the side from Siberia had never achieved since it started competing in the European Cups almost two decades ago. This and other volleyball news read on Worldofvolley.com. 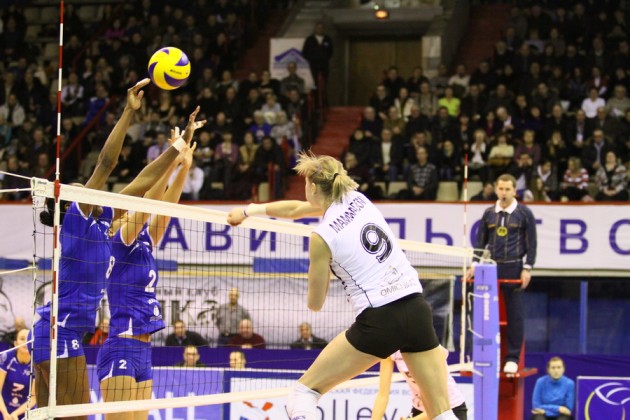 Omichka did so by edging for the second time in seven days Romania’s 2004 Tomis CONSTANTA (25-17, 25-13 and 25-23) to play in the semis the winner of the Polish derby starring Bank BPS Fakro MUSZYNA and Aluprof BIELSKO-BIALA.

Some 2’500 fans were in attendance at Athletic and Concert Complex “V. Blinov” to support the home heroines, including Viktor Nazarov, the Governor of the Omsk Region, and players of the local ice hockey team “Avangard”.

After a good start by the guests (4:6), Omichka drew level with an ace by Ekaterina Orlova and got to the front already by the first technical time-out of the opening set (8:6). Omichka did control the game (13:9) forcing Tomis head coach Darko Zakoc into a time-out. His players could respond well by scoring the next three points but that was all, since Omichka accelerated the pace and a block by Yuliya Podskalnaya finished the set (25-17).

Omichka got up 8:4 in the second set and gradually but confidently widened the gap (20:13) before the provisional 2:0 was cashed via an ace by Nelli Alisheva (25-13).

Natalya Mammadova scored the first point for the hosts in the third set and Omichka set the tone (8:3) quite early as it had done in the previous sets. As they trailed 6:13, the guests could fight their way back and home mentor Zoran Terzic was obliged to stop the game by the time the gap was reduced almost to a minimum (23:21). Still, Mammadova was on fire and she could finish the game on a high note (25-23) to celebrate a well-deserved 3:0 win.

“Congratulations to Omichka and I wish them the best of luck for the semis” said Tomis mentor Darko Zakoc. “Before the start of the Challenge Round I had said we had problems with our roster since it is very difficult to play without opposite and having only two outside hitters. On top of this Omichka has a very strong team and represented a real challenge along the way to the semis. Sometimes we were not as brave as we had been in our home match”.

“I congratulate the players and the local Volleyball family for this historic qualification for the semis” stressed home coach Zoran Terzic. “I am very satisfied with the match as we have been able to improve on our reception since the game we played in Constanta. Olga Fateeva was also included in the starting six as she has worked very hard and was ready for the game. The next round will be tough regardless of the Polish team we’ll get to play with”.

“Tomis was more concentrated than in the first game. They did not want to lose and they fought for every ball. We displayed some great team work and everyone contributed to the final result” said Natalya Mammadova.

“We respect every opponent and prepared well for this match. Today we were better and also stronger than Tomis. We are very motivated and want to make it to the finals” concluded libero Olga Terekhina.

CEV CL F: Azerrail routs Lokomotiv once more to make it to Playoffs 6

RUS M: Muserskiy and Spiridonov are back...

RUS M: Ural got themselves a player...