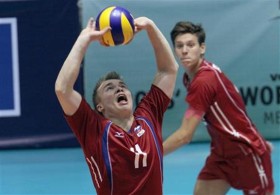 Pavel Pankov – one of the most reliable players in “Zbornaya”

In the other match of the day Italy got their revenge from the European Championship played this past April for this time they could edge their neighbors from France 3:2 (25-21, 27-29, 20-25, 25-19, and 15-11) thereby redeeming for a defeat that had kept them out of the World Championship. After two days Poland leads the way in Pool B with 5 points, followed by France (3) while Italy and Belgium have 2 points each.

Final 6 out of woman’s perspective