The Omichka OMSK REGION women’s volleyball team takes pride in occupying the second place in the provisional ranking of the most prolific teams in the ongoing 2014 CEV DenizBank Volleyball Champions League - Women. 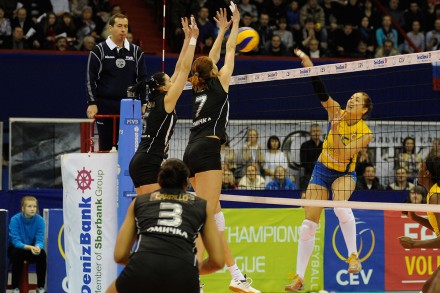 The Omsk Cats are leaders in the number of aces (85) and ranked fifth in attack efficiency (36%). Among the team’s remarkable achievements in the overall season’s individual statistics are Nancy Carillo’s second place in number of aces (21) and third place in scoring among the opposites (185 points), Natalya Mammadova’s placement among the top three scoring wing spikers (138 points) and Elena Yureva’s third position in number of aces (19) and in scoring among the middle blockers (100 points). Omichka is also proud of Marina Babeshina’s second place as best scorer among the setters (33 points) and Iuliia Kutiukova’s position among the top seven receivers (38.29%).

The club also takes a look at its history of playing in the European Cups.  In its six participations Omichka has played as many as 40 matches against clubs from 14 different countries, winning 27 of them, as well as two Golden Sets.

AZE W: Wilson back in Azerbaijan, this time in Locomotiv