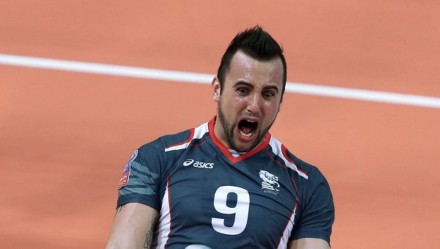 Grozer is still trying to come to terms with the so far greatest success of his sporting career: the victory in the 2014 Champions League.

Currently, he only has one goal: to repeat this triumph– at the Final Four on the weekend of 28th-29th March in Berlin.

“I was really, really happy and glad for the German volleyball. If we manage to reach the Final Four once again, in my home country, that would push me forward even more! To reach this goal is the most important thing for me personally and I’m working really hard for it”, said the born Hungarian to CEV when heard about Berlin Recycling Volleys and not Zenit Kazan to host this year’s Final Four.

However, the road to Berlin could be hardly any less difficult for Belogorie Belgorod as the team will clash with last year’s finalist Halkbank Ankara from Turkey in the Playoffs 12. In case Grozer and Co. can edge Halkbank – meeting with Zenit in the round of the last six teams would be very likely.

“If we want to be the best team in the world, there will be the point at which we will have to outdo any opponent given”, Grozer’s not afraid of the tasks ahead.

Matt Anderson – “Alekno was upset, there...