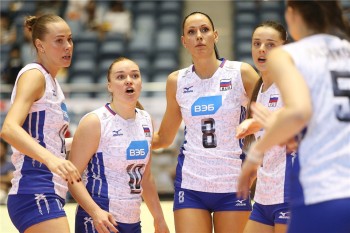 The battle for the Olympic Games has begun! In the first game of the Women’s World Cup 2015 Russia has easily outplayed Dominican Republic by 3-0 (25:15, 25:18, 25:18), mostly thanks to brilliant performance of Nataliya Obmochaeva. Russian star scored 24 points, while she had a great help in Yana Scherban who added 14.

Recall that the Women’s World Cup 2015 is placed in Tokyo, Japan, and that the top two teams will qualify for the Olympic Games 2016. The tournament has just started, we will see who will win those precious tickets.

Ooops… She lost a shoe in the middle of the game! (VIDEO)

RUS W: Kurilo will miss the next...