Russia beat Bulgaria 3-1 Friday afternoon in the first semifinal of men’s volleyball of the London 2012 Olympic Games at Earls Court. 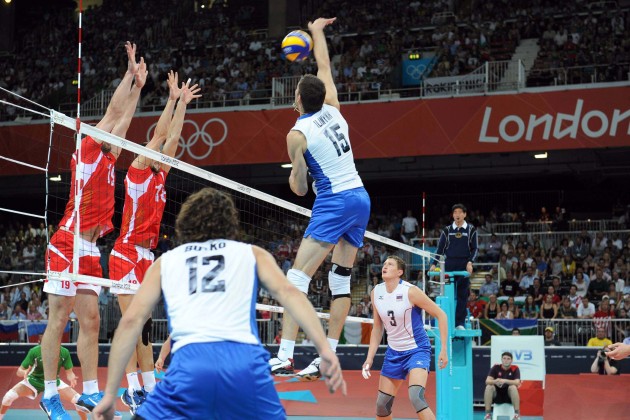 The two sides have been among the most powerful in the tournament so far. World No. 2 ranked Russia came into the match with the tournament’s top scorer, Maxim Mikhaylov. World No. 9 ranked Bulgaria have been inspired by Tsvetan Sokolov, who was the second on the scoring table.

This marks the first time since Moscow 1980 that Russia will be in the gold medal match in volleyball.

“It’s really good to be in the final”, said Russia’s Maxim Mikhaylov after the match. “People started getting nerevous and making mistakes. We needed to calm down. It will be a dream come true to win the gold, for our country, our fans, everybody.”

Russia head coach Vladimir Alekno said following the match, “We experience the same thing every year as far as pressure is concerned, which I would call hysterics of success. This creates a lot of pressure for us and expectations to make no mistakes. We used all 12 players because it is hard for any of them to sustain all the match. Taras (Khtey) is very important for the team as captain and a personality.”

Speaking about the feelings and expectations of being in the gold medal match, Russia’s Alexey Obmochaev commented, “I am very happy of course, but we still need to keep our guard up. Brazil and Italy are both strong in one way, but I think Brazil may win over. We cannot be sure of anything. We just have to play. As usual we will do nothing special to prepare for Sunday’s final. We just have to play. We worried before the match with Bulgaria because they had surprised a lot of teams.”

Bulgaria’s coach Nayden Naydenov said afterwards, “I wish Russia the best for the final. It was a match we managed to keep going, but in the end we lost. I wouldn’t say that something went wrong. In the fourth set, it was really close. The Russians have really good service and that made the difference. We have to practice our serve as well. Back home, the reaction will be normal – we fought until the end, we didn’t give up. We will remember the London 2012 Olympic Games only with good memories. We were in the semifinal, that was a really good moment.”

OG W: The ten prettiest contestants of the Olympic Games