CL W: Clash of champions in fifth round

Two defending champions from Serbia and Italy will meet this Tuesday in the prelims of the 2014 CEV DenizBank Volleyball Champions League – Women. Crvena zvezda will be hosting RebecchiNMeccanica PIACENZA for its last home match. 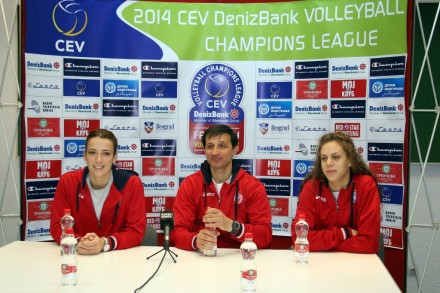 In the last two games Crvena zvezda took two sets to Dinamo MOSCOW and in a good mood tomorrow will meet Italian champion.

We have a tough schedule of matches in Europe and domestic championship but we love it and it is not difficult. In my opinion, Piacenza is the best organized team and for sure our Pool is the most difficult in the Champions League. I think that they will go to the second round and may be in the final because of their play  said Zvezda`s mentor  Ratko Pavličević.

Against them you have to be tactically well organized and mature. I sincerely hope that we will do our best in front our spectators, that we will leave our hearts on the court, but we have to be calm and play the best we can.

In Piacenza we played our worst match in the CL and I hope that this time we will be much better. Physically, they did not stronger than us, like Dinamo, but they have other quality, like as attack and defense. We will try to surprise them, but we will see adds Nikolina Lukić receiver of Crvena zvezda.

We are hoping that Delije and others will come to our Hall and support us. Always, we are playing on high level when the stands are full so I believe in our audience said young blocker Mina Popovic.

This is hilarious – We found new...