Nikola Grbi' added yet another award to his personal resume last June 27 receiving the prize for the “Ultimate Team Leader” at the 2014 European Volleyball Gala in Vienna. It was the perfect way for the Serbian Volleyball legend to draw the line at the end of a career that lasted for more than 20 years, since only a few days before the event held at the Hofburg Palace he announced he would retire from competitive sport to take up a coaching job in Italy. 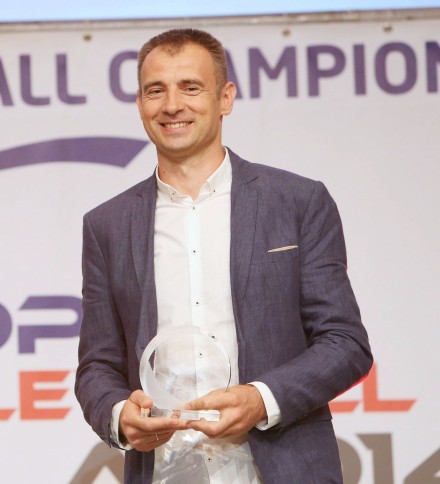 Grbić had moved to Russia for the 2013/2014 campaign joining the ranks of Zenit KAZAN after their setter Lukasz Zygadlo suffered a serious injury preventing him from playing for the whole season. He played a major role in making sure the Tatars would win the Russian Superleague after a rather disappointing performance at the Final Four tournament of the 2014 CEV DenizBank Volleyball Champions League where they ended up in fourth place. Still the news he would stop playing and embark on a second life as Volleyball coach caught many by surprise.

“The day after the last match of the Italian Playoffs I received a phone call from the president of Sir Safety PERUGIA who offered me the opportunity to be their coach for the next season,” Nikola explains. “My wish, after finishing my competitive career, was to work as a coach and this was a great opportunity to start this adventure and second life at the helm of a good team.”
Nikola’s career has spanned for more than 20 years and it is difficult to re-collect memories to share with his fans.

“There have been so many nice moments that I would need more time to share them all! Quite understandably the nicest memories are linked with the greatest successes I was able to achieve with the national team as well as with the clubs I have been playing with. However, I would probably single out the bronze medal we won at the 1996 Olympics in Atlanta; it was a real surprise, not only for everyone who follows our sport, but for us as well.”

Grbić does not seem to have anything to regret at the end of such outstanding career: “I think that every moment, the highs and the lows, are important in everyone’s process of improving yourself, not only as a Volleyball player, but most of all as a person.”

Nikola also knows where his personal success comes from: “There is a lesson I have taken throughout this 20 years and more I have spent in Volleyball: if you really want to achieve something, you have to work hard. And you have to do it yourself, because nobody else will do it for you.”

Nikola’s retirement from competitive sport marks the end of the “Grbić era” in Serbian Volleyball. There are nevertheless another two brothers currently on the national team who may follow in the footsteps of Nikola and Vladimir, Nikola and Uroš Kovačević.

“I really hope they can be our heirs. The only difference that I see with me and Vladimir is that they play in the same position, they both are excellent wing-spikers.”

Grbić will start his second life in Volleyball at the helm of Sir Safety PERUGIA, the runners-up of Italy’s national league who are set to make their debut in the elite CEV DenizBank Volleyball Champions League this year. Nikola is not afraid of the challenges ahead:

“There is no room for fear! Actually I am very excited with this challenge and can’t wait to start my work with the team. The team has set very high goals but I do have high goals too, so this is something we have in common. It will be difficult to follow the match from the side lines, at least at the beginning, but I will get used to it. I want to make sure that all of my players perform at their best and this then will turn into good results. And if we do not win, at least we will know that we have done everything we could in order to achieve this goal.”

Nikola has been around for more than two decades and has seen Volleyball undergo some major changes. Still he sees room for improvement: “I think there is still much to improve on the individual, technical skills. Right now I have the impression that too much emphasis is being put on physical preparation, without taking into account the accuracy and precision required by the technique.”

One year ago Nikola’s brother Vladimir had also stood on the stage of the European Volleyball Gala, receiving the Lifetime Award. Vanja, as he is also known, also became one of the first ambassadors of the CEV “Fair Play – Volleyball Way” campaign. Nikola echoes his elder brother in supporting the core message of this action:

“Volleyball really stands apart when it comes to fair play. There is no physical contact and therefore also no chance to cause any intentional injury to your opponent. Volleyball is the sport which is being attended by families with children who come to see the matches because they know that nothing bad or unexpected will happen. I am proud that back in my young years I decided to take up this sport and become a member of this great family.”

A success story to be continued, once the new season will get underway later this autumn…