Turkey and Austria completed their campaign at “Baskent” sports hall in Turkey’s capital city with a couple of wins to finish first and second respectively in the standings of the group and qualify for the final round of the 2013 CEV Youth Volleyball European Championship – Boys scheduled for April 12-21 in Laktasi (BIH) and Beograd (SRB). Read latest volleyball news on Worldofvolley.com. 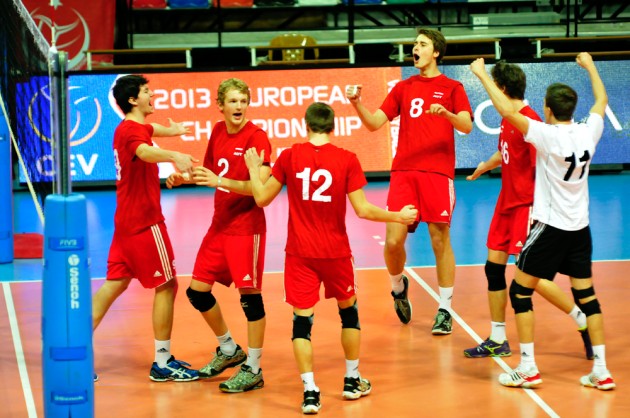 Turkey had already booked their ticket on Sunday but they eventually finished the competition with an immaculate record of five wins in as many matches after edging Spain on Monday in straight sets (25-21, 25-18, and 25-17). With this result all chances for Spain to make it to the final round of the Championship were gone. Turkey’s wing-spiker Cansin Ebonaifo top scored for the winning side with 15 points including 2 blocks.

The happiest guys of the day were definitely the members of Austria’s national team who could qualify for the final round of the European Championship after beating Lithuania 3:1 (24-26, 25-15, 25-21, and 25-17). Austria’s performance was particularly remarkable from the serving line with a total of seven aces with Paul Buchegger being once more the most prolific scorer with 30 points.

In the other match of the day and with both teams already out of contention for a spot in the final round, the Netherlands needed five sets to get past Romania (25-21, 25-27, 25-23, 19-25, and 17-15). It was a real marathon where the “Oranjes” had a little bit more of luck in the end after their opponents from Romania hadn’t capitalized on two match balls. Mihai Tarta paced Romania with 26 points while Chris Ogink registered 22 for the Netherlands.