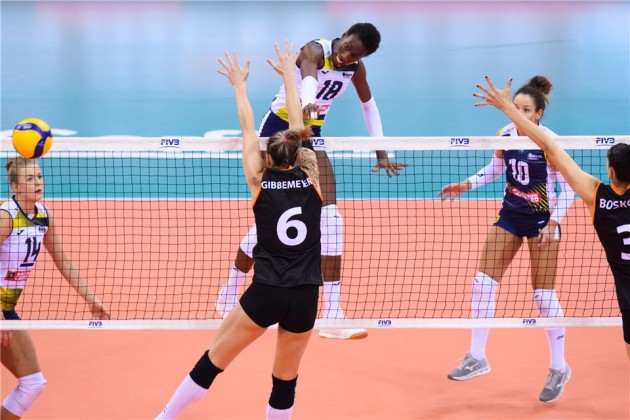 According to Gian Luca Pasini’s post in his blog, Turkish champions VakıfBank prepared a super offer for Michelle Bartsch! The Istanbul team would like to have an American outside hitter (two-time FIVB Nations League winner with the U.S. National Team and one-time MVP of this tournament) from January 2020. That’s when Bartsch’s contract with Beijing will end due to the shortened club season in China.

Pasini added that VakıfBank aren’t happy with the performance of Swedish newcomer Isabelle Haak so they also think of bringing in another big name of the world volleyball – Paola Egonu! However, the 2019 CEV Champions League MVP is planned to strengthen VakıfBank for the next season. It will cost Turkish giants a lot, knowing that Egonu has signed a two-year contract with Imoco Volley Conegliano this summer.

CWCH 2019 M: Leal – “Thank you Bruno for acknowledging my performance since FIVB didn’t”

INTERVIEW: Nikola Matijašević for WoV – “Rennes President invests a lot of his personal funds, which is fantastic for volleyball“

I don’t know about this. I think Haak is doing well but not great since she is the highest paid player on the team. Haak has been working really hard, lost weight to jump higher, hit the ball well but just not putting the ball away on her attacks. Gabi is a good attacker but she is just too short therefore being blocked easily. They had 4 match points against Imoco but failed. I believe the key reason is they don’t have enough offensive plays to confuse the defense. The blame should be on the whole team including the coach. Ebrar is practically useless, Rasic’s blocking is just not the same and their defense overall is lacking. I also think Vakifbank is rethinking about Zhu Ting seeing how serious her wrist injury is.

I just knew from the start of the 2019-2020 season Vakifbank will still have an addition in the roster. I think they used the first half of the season training and exposing Karakurt in preparation for the Olympic Qualification.

So Ebrar out and Haak will be replaced ? I suppose Ezcacibasi will respond, Kim is definately not in her league, i think Tijana need some partner, and Natalia is not the one. I still cant see Egonu moving from Italian league to Turkey, that must be some great payment to do so. Otherwise, i would like to see Brakocevic & Tijana in same club, no other option to respond to Vakif. Unless Natalia and Kim will push their game. Maybe Tijana should go to Novara, her season if nulled with this team.

Re: @Game changer Tijana Boskovic and Jovana Brakocevic play the same position, opposite, so they will never play in the same team because none of them want to sit on a bench

Re: @Game changer Kim is doing better this season than last. I think She was made captain of Ecz Vitra. Natalia is doing fine. She does great in regular matches. The only issues I see is she doesn’t kill the ball in important matches. Novara can’t afford Boskovic. She is making at least $1M euros per year.

Tijana cant go 5 setter without some rest, and when she in out Ezcacibasi is on loose. So Brakocevic would easiliy replace her, and she is erfect in block and serve.

If Conegliano can pay Egonu more than MIO than i think Novara can do that too, but You need perfect team, they can push it, if players would like so. Kim and Natalia are responsible for defeat at Clubs Championchip in China. Natalia is bad copy of Gabi, and Kim is far from her form while playing in Asia. Would not pay that a MIO. They just lost 3-0 to Vakif day ago. If they continue like that Tijana would rather pass to Italy, because this Ezcacibasi is not in form to get some trophy. Vakif is now to storng for them, with Egonu in that means Goodbye Ezca.

Re: @Game changer
no italiian team can pay the astronomic salalaries paid by istanbul clubs. Egonu plays for imoco simply because no turkish club has preferred her so far.
as for Ebrar,vakif and guidetti ‘s priority is turkish NT, i.e.ebrar is simply untouchable in vakif, no matter how good or bad she is.
vakifbank, although a young and new team,is already too strong (remember imoco had to save 9 match points against them),so vakif doesnt need any hellish plan 😀 but just zhu.

ı don’t think egonu will come vakıf, believe or not haak is doing good job, ı think main problem is gabi and ebrar-meliha in vakıf. ebrar is irreplaceable because preparation of olympic qualifying but can’t say for gabi.