With US American Olympic silver medalist Lindsey Berg celebrating tonight her debut in this year’s European Cups, Fenerbahce SK ISTANBUL did cruise to a speedy 3:0 win to edge Tauron MKS DABROWA GORNICZA in the first clash scheduled for the Challenge Round of the 2013 CEV Volleyball Cup. This and other volleyball news read on Worldofvolley.com. 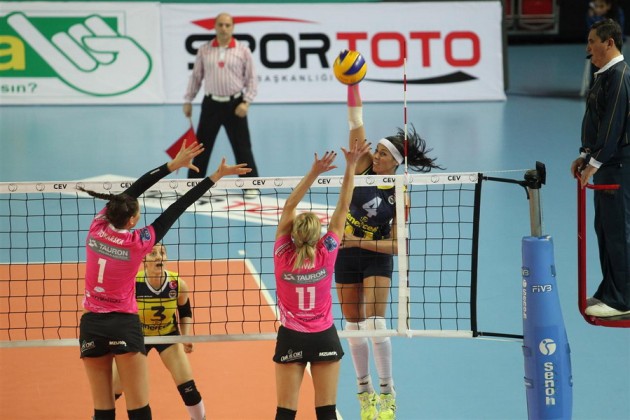 Some 1’200 fans had found their way to “Burhan Felek” Volleyball Hall and they contributed the right ambiance from the start of the match whereby their heroines wanted to lay down the right foundations for making it to the semis. Fenerbahce opened with an 8:5 run and did show a good tempo anchored by Berg and with the duo composed by Kim Yeon-Koung and Eda Erdem Dündar standing out in offense (25-20).

The course of the game did not change at all also in the second set where Tauron tried a few options but their attacks were regularly touched or stopped by the block of Erdem. Tauron coach Waldemar Kawka opted for some substitutions but could not stop the triumphal march of the local heroines who comfortably went for the provisional 2:0 (25-16).

Tauron MKS players looked mentally down in the early phases of the third set, while Fenerbahce did storm out to a massive 8:2 that practically determined the fate of the match. By exploiting the comfort of this margin, Fenerbahce head coach Kamil Soz used all of his players and the match ended after 75 minutes with a well-deserved 3:0 (25-11) for the winners of last year’s Champions League.