Turkey scored their second consecutive win in the first round of action for the prelims of the 2013 CEV Volleyball European League. The young Turks did edge Romania 3:1 to follow up on yesterday’s victory over Hungary and claim first place in the provisional standings of Pool A. 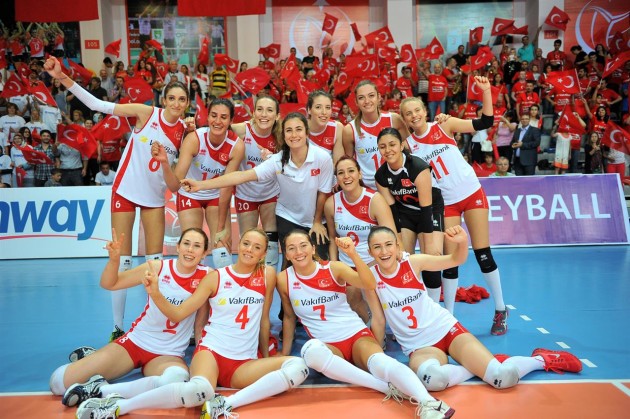 Turkey started out strong with Polen Uslupehlivan scoring with good consistency and Romanian head coach Marian Constantin was forced to ask for his first time-out as his side was trailing 4:7 in the opening set. Still Turkey continued to play good and with a series of blocks made it 12:7 by the time the technical time-out was called. The hosts did not slow their pace down and comfortably did claim the opening set with the score of 21-11.

Romania bounced back in the second set going up 8:4 forcing Turkey’s head coach Mehmet Bedestenlioglu into a time-out. Turkey responded well and leveled the score at 8 before moving ahead at the technical time-out (12:10). Romania evened the score once more at 13 with good serving by Diana Calota before Uslupehlivan and Gözde Yilmaz delighted the home fans in Bursa as they anchored their side to the provisional 2:0 (21-19).

Romania caught a good start also in set 3 (3:0) and dictated the pace of the game halfway through (12:4) before Turkey scored some points with Dilara Bilge and Gamze Alikaya. Still the hosts could not compensate for that disastrous start and Romania called for a fourth set (14-21). Turkey found back their best play there (4:0, 12:6) and did speedily cruise to the final 21-10 to bag their second win in the competition.

Uslupehlivan top scored in the end with 19 points while Yilmaz added 13 to Turkey’s count; Ioana Baciu registered 10 for Romania.

“Bulgaria lost yesterday to Romania and these were bad news for us because they are the strongest team in our Pool” Turkey’s head coach Bedestenlioglu says. “However, we did make fewer mistakes than we had made yesterday with Hungary and could score a positive result. This is a very important win. We want to win tomorrow as well with Bulgaria to complete the first leg on top of the standings”.

PANAC W: Brazil reaches semis with the U-20 unit