The crown of CEV European League – Men is at stake this weekend in Turkey. Four teams will clash in Amiral Orhan Aydin Sports Hall of Turkish city of Marmaris with only one goal: to become the new tournament champions. This and other volleyball news read on Worldofvolley.com. 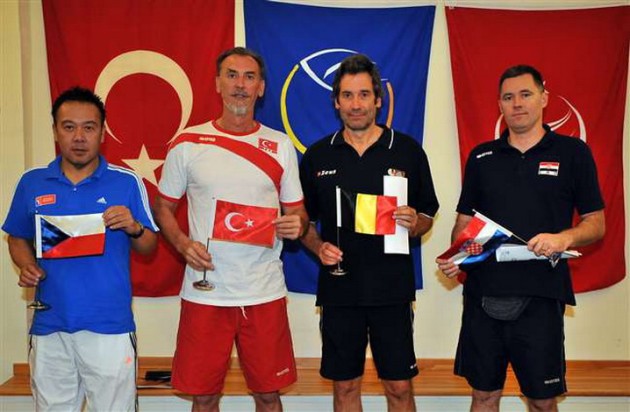 The squads of Czech Republic, Belgium, Croatia and host Turkey live with anticipation and excitement the hours before their début in a Final Four tournament staged to cause sensation among Volleyball fans.

The curtain-raiser of this last stage of the competition will see Czech Republic clashing with Belgium, in a match scheduled for Saturday, at 15.00 hours (GMT +2). The Belgian squad will try to continue its impressive winning streak, certified after 12 victories in 12 matches during the preliminary round in pool A, in order to reach the title-deciding game in its first qualification for the final round of the tournament. “We are now finally in the Final Four. I think there will be tough matches throughout the weekend. It is not easy to win, they are all good teams, but we came here to win. We’ll do our best in the Finals and try to be the champions”, said Belgium Head Coach, Dominique Baeyens.

Meanwhile, the Czech men made it to the Final Four as leaders of pool B and aim to recover the title acquired in 2004. “For Czech Volleyball it is very important to be among the best four teams of the tournament. Even though we have a young team, it is important for us to get experience and be able to play at good level”, said head coach of Czech Republic, Stewart Bernard. Czech Republic lifted the champions cup in the first edition of CEV European League and haven’t reached the last stage of competition ever since, so Stewart Bernard’s group expects to put a golden end in its second participation in the decisive round of the tournament. “We face Belgium, a team that had an impressive record in the first part of the competition; they are favourites, no doubt, but this is Volleyball and we will try to perform at our best”, said Bernard.

In the second Semifinal, scheduled for Saturday at 18.00 hours (GMT +2), host Turkey meets Croatia in a match that is initially presented as history repeating since both teams crossed paths four times during the preliminary round. Croatian squad, a team that joined the competition as substitute of Portugal, finished as leaders of pool C, with four victories over its rivals in the semifinals.“This is what I call a ‘No Excuse Game’”, said head coach of Croatia, Igor Simuncic. “In the groups, you could win or you could lose but on Saturday, it will be no excuse for us. It is the most important match and there’s no excuse not to give a 100%”, added Simunicic.

Turkish team, on the other hand, will try to use the support of local audience to make it to the Final match, aiming also to leave in the past the disappointment of losing the title last season against The Netherlands.“It will be a very difficult game. We played with them before but now we are in the Finals. We know the importance of this tournament. If we win, we will get the right to join the Intercontinental Qualification Round for next year’s FIVB World League. So we’ll do our best in the matches. We’re ready now”, said head coach of Turkey, Veljko Basic.

The city of Marmaris is prepared to enjoy the quest for European League title, as the four contenders get ready to put their illusions and expectations into play in the thrilling final round of the CEV European League.