What should have been a derby became the one team show. Fenerbahce hammered Galatasaray Daikin in three sets, but the last one, unfortunately wasn’t finished. At the lead of Fener 23:13, referees decided to leave the court apparently because of the abusive cheering from the stands. Anyway, three points goes to away team. Galatasaray Daikin – Fenerbahce 0-3 (21:25, 17:25, 13:23). 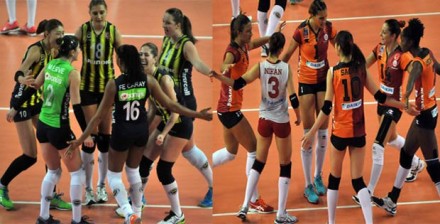 Game was interrupted in opening set also, after first TTO, because fans were making some problems. Match continued normally after a short brake, but it has never been finished.

Too bad it all ended this way, because, you can’t say that Galatasaray players weren’t fighting enough… They really did. But Fenerbahce girls were amazing today. Every time made a powerful start of set, and then just a routine finishing.

RUS W: There could be only one Dinamo – Kazan beat Moscow