Impressive! Ivan Miljkovic and his gang won the third and most precious Turkish trophy this season - Turkish League! 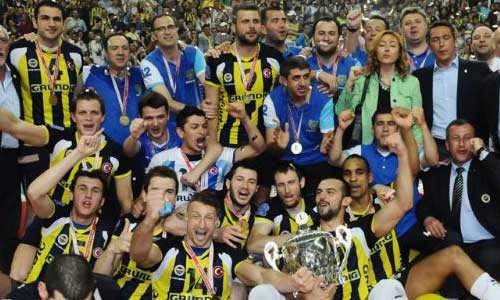 Being a Turkish cup and Supercup winner this season, Fenerbahce maintained their position of the best Turkish team of the last 3 years, as this is the third consectutive Turkish League championship for this club.

Coach Daniel Castellani who is leaving Fenerbahce after 1,5 seasons can be more than satisfied: he brought nothing less than two league championships, one Turkish cup and one Super Cup to the yellow-blue colours.

The same goes for Ivan Miljkovic who – as usual – really made difference in any game and who was without doubts the most decisive power in all important matches with his heart always beating for his team.

After two seasons in Fenerbahce, Miljkovic is allegedly leaving as well.

In the third match of the final series, very focused Fenerbahce performed much better than Arkas who was already playing without their first setter Kevin Hansen and except of even first set (25:23), did not leave any doubts about the next champion.

Game did not miss nice volleyball moments, lots of struggle and some long rallys, all this happening in front of thousands of frenetic Fenerbahce fans who turned the end of the third set into grand celebrations.