As some years ago, the historical Héctor Etchart Stadium in Ferrocarril Oeste was overcrowded with volleyball fans that wanted to see the best volleyball of outstanding teams. With the goal of helping the clubs of the city and its surroundings that suffered great damages on April 4th storm, over 2,500 spectators first saw the Argentine Seniors' Women team play against Boca Juniors (two last years League champions) and then the amazing final match (played a total of five friendly ones) between the Argentine and Cuban Seniors' Men Teams. 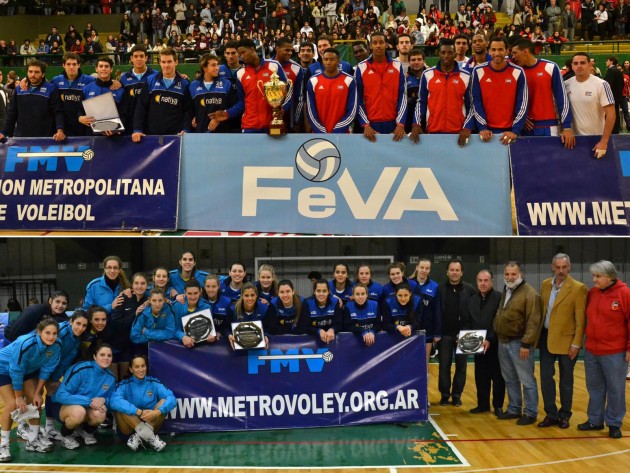 Once more, as last Thursday in Moron, all the ticket money goes to the clubs that suffered great damage, and the volleyball family answered the call for help watching the previous matches of both Argentine Seniors’ Teams that in a couple of weeks will participate of their Olympic Qualification with the Women’s taking place in Brazil and the Men’s in Almirante Brown, Argentina.

In a match programmed previously to three sets, the Argentine team coached by Horacio Bastit, recovered from a bad start to overcome Boca Juniors 2-1 (22-25, 25-11, 26-24). The coach gave time in the field to most players trying different combinations and supervising his girls.

The seniors’ men clash was very hard finishing with the victory for Cuba 3-0 with Argentina showing its best on the first and third sets. While part of the team is playing v the Olympic Champion USA in Anehaim, Juan Manuel Barrial as coach gave 9 of his players the chance of growing against one of the best teams of the world.