This Friday night, the Argentine Seniors' that travelled to the States, coached by Javier Weber, to keep training towards their South American Olympic Qualification Championship - to be held in Argentina's Almirante Brown beginning next May - faced on their first programmed friendly match the host team at Pabellon JSerra, a school located in California. The light blue - white jersey team keeps adding experience with Weber rotating all his players. USA finished winning 1-3 (25-21, 23-25, 19-25, 17-25). This Sunday will take place the second match. Both teams are repeating their 2008 Olympic dream path hosting friendly matches between them, prior to both hosting this 2012 London dream at home. 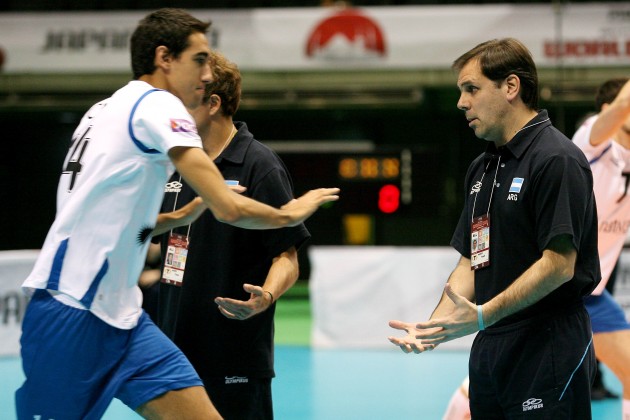 Argentina started playing with Nicolás Uriarte, Federico Pereyra, Pablo Crer, Sebastián Solé, Nicolás Bruno, Pablo Bengolea and Franco López but during the match, Weber changed players to give them all a chance of experiencing and growing during the event.

This Saturday the team will train with the second match taking place on Sunday at 14.00 local time.

The main news of the tour is that the team finally has 11 players as Rodrigo Quiroga remaining in Turkey to participate of the Final Series of the Turkish League with his team, Fenerbahce. He was replaced by his brother Gonzalo, that plays at the USA University Volleyball remaing with the Argentine team until the tour ends.

Argentina worked with weights and training during the first days after their arrival to USA playing a two set match v USA with Uriarte, Pereyra, Bengolea, Bruno, Crer, Solé. De Cecco and Martina (this last two in the double change) while Arroyo replaced Crer in the second set.

Guillermo García is training different to recover and stand ready when the international season starts mid May, first with the Olympic Qualification Championship and immediately afterwards with the FIVB World League 2012.