Ankara, Turkey, May 6, 2012. Imagine the president of a national volleyball federation joining the ranks of the volunteers helping with the organization of a competition. Well, you do not have to imagine it. This is certainly something that you do not see everyday, but you can see it at the 2012 Olympic Games - European Qualification for women in Turkey. The President of the Swedish Volleyball Federation Saffet Eraybar has flown from Stockholm to Ankara to be part of this important volleyball event. 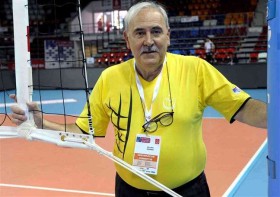 Saffet, as he introduces himself, is certainly not in Ankara to put on a suit and a tie and watch the games from the VIP stands in between shaking hands with distinguished political figures and other governors of volleyball.

Instead, from the very first day of the competition he wears a yellow volunteer t-shirt and sinks his hands into the busy everyday work that goes on down by the playing court.  He has done this for many competitions in his native Turkey before.  This time his official position is that of a liaison between the local press team and the CEV Press Delegate, but as he says, he does not mind even grabbing the mop if necessary.

”I love my sport.  Volleyball is my life,” is the simple explanation Saffet Eraybar has for this unusual situation.

”I would take any opportunity I get to help the Turkish Volleyball Federation, or any other volleyball federation for that matter, as a volunteer.  I like to be near the players and near the arena.”

Saffet was born in Turkey and started his volleyball career at Galatasaray ISTANBUL in 1960.  He is the youngest brother of Turkish volleyball legend Değer Eraybar – the first player in history with 100 caps for the Turkish national team.  But it was his other brother Yener he followed in 1966 and moved to Sweden to study in a sports school there.  There he played for ESKILSTÜNA VK through 1972 and became a three-time silver and three-time bronze medal winner from the Swedish national championship.  In the years to follow he was a volleyball coach and a volleyball manager – always close to his favorite sport.  In 2011 he was elected president of the federation.  He stays in close contact with Turkish volleyball and whenever they ask for his help his response is positive and he hops on the plane to Turkey.  Saffet loves his native Turkey.  However, to the question which team he would root for if Turkey played against Sweden he passes the test of professionalism – ”100% for Sweden,” is his answer.