The recent participation of female referees in a variety of NORCECA volleyball events simply reflects how the authorities of the continental confederation are committed to offer women the same opportunities as men. 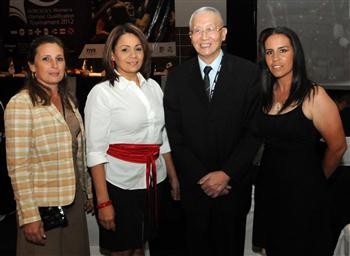 “We do believe in the women’s capabilities and therefore we are giving financial assistance to National Federations to send female aspirants to our candidates’ courses as a way to enhance the growth of the number of female referees,” FIVB first executive vice president and NORCECA president Cristobal Marte Hoffiz said.

It is not the first time that number of female referees from NORCECA countries takes part in the same tournament but it confirms the identification with a trend being promoted by the International Volleyball Federation and its policy of equal treatment to individual of both genders.

Sanfiorenzo recalled that a trio of women worked in the same NORCECA event occurred in 2009 during the women’s continental championship in Bayamon, Puerto Rico when she and Perez joined veteran Patty Salvatore of the United States.

“We have experienced a significant growth following a trend all over the world with more and more women officiating matches in our different tournaments,” Sanfiorenzo commented.

“During his four-year term as FIVB President, Jizhong Wei, has been an advocate of female referees and we are receiving more opportunities to take part along with our male colleagues,” the Puerto Rican said.

Cuba’s Pérez can project an increase of female referees within NORCECA Confederation in the near and mid-term future.

“The Confederation is organizing more referee courses and promoting the integration of women to them as part of the process of equal participation and development,” Perez said.

“There are more chances for us in the different regional events and it shows the interest to develop an area where the scarce of women was evident in recent years,” she added.

“I am very proud about being a referee and it’s a great opportunity for us to work in this event,” said Duran, who also worked in matches during the Pan American Games in Guadalajara, Mexico last October. “I can see more women embracing this activity in the future and doing as good work as the men.”

VINTAGE VOLLEYBALL: This serve has changed the...