The first ever game of Gloria Cup will stay remembered by the win of VakifBank over Azeryol. 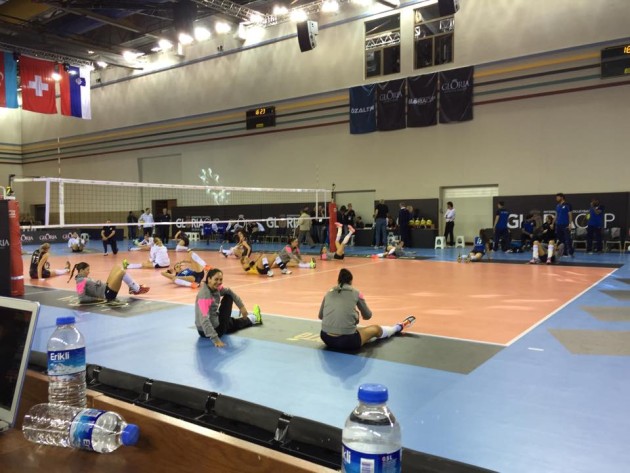 Costagrande with strong spike and VakifBank has won the match – 25:23!

Bayramova makes a mistake and spikes the ball into the net – 24:21.

Brakocevic redeemed with a strong spike – 22:21 for Vakif.

What a mistake of Brakocevic who was without block but touched the top of the net – 21:19 for Vakif.

Ufff, directly from the block in the head of Rasic… Point goes to Azeryol 20:19.

But Costagrande blocks Filipova and it is 19:17 for Vakif.

And now it is 16:14 for the Turkish team. Major comeback!

Again De Kruijf! She nailed the ball for 15:14 lead of Vakif!

Good block of Brakocevic, but De Kruijf in unstoppable on the other side. Duth player firstly spiked for 14:13, and then blocked for 14:14.

Good block of Vakif and it’s only 13:12 now for Azeryol. Time out for Chervyakov.

And it’s 12:8 for Azerbaijani side. Guidetti calls for a time-out.

Nikolic again stronger than block of Vakif – 11:8 for Azeryol.

Bayramova makes it 7:5 for Azeryol.

Couple of missed serves at the beginning – 3:2 for Azeryol.

Vasileva into the net – 17:16, Will we have another dramatic set finish?

As here in Turkey people say – Mola Azeryol. It means Azerbaijani team had to call for a atime-out as Vakif leads 10:7.

She misses the next serve, while Costagrande blocks Brakocevic – 8:7 for Vakif

Brakocevic ties at 6:6, while Bayramova makes ace for 7:6, Azeryol in lead again.

Fantastic rally and a set ball for… Azeryol! Several good defenses on both sides before Nikolic ended the point – 25:24 for Azerbaijani team.

Costagrande makes point on one side, Filipova on the other. Still tied – 21:21.

Bayramova with block! What a comeback of Azeryol – 20:20!

Azeryol won’t just give this set without fight – 20:18. Time-out VakifBank.

Brakocevic stooped by the block, then Costagrande makes points and Vakif increaes the lead on 19:16.

But, Sheilla with one more excellent spike returns the lead to Vakif – 16:15.

Brakocevic and Poznyak block Vasileva! It’s all tied at 15:15!

Another amazing rally and strong spike of Filipova – 10:8.

Long relly which ends with a block of De Kruijf! VakifBank has taken 5 consecutive points and now leads 8:3.

Sheila with one more great service, Bayramova hits only net – 7:3.

Excellent serves by Sheilla, and even better defense of Vakif which leads 6:3.

Costagrande sends the ball into out and the first set goes to Azeryol – 25:20

Big rally, some great saves of Vakif, but Azeryol takes the point – 23:18. Second time-out in a row for Guidetti.

Sucn an important block of Azeryol on Costagrande – 22:18 for Azerbaijani team.

Filipova with another important spike – 20:17 for Azeryol.

What a spike by Nikolic who takes Azeryol on 16:10!

Vakif misses a counter, and then Rasic spikes the ball into net – 15:10 for Azeryol.

Three great blocks of VakifBank, and even better counterattacks. Turkish side reduces deficit on 13-10. Azeryol time-out.

Azeryol continues with excellent volleyball – 11:5. A lot of mistakes from VakifBank.

Brakocevic is on fire, she scored 4 of last 5 points of Azeryol and Azerbaijani team has the lead on the first TTO – 8-5.

The first ever point on the Gloria Cup belongs to Azeryol!