Two hours and a half! That is how long this volleyball spectacle lasted! At the end, it was VakifBank which celebrated such a valuable tie-break win over Dinamo Kazan! 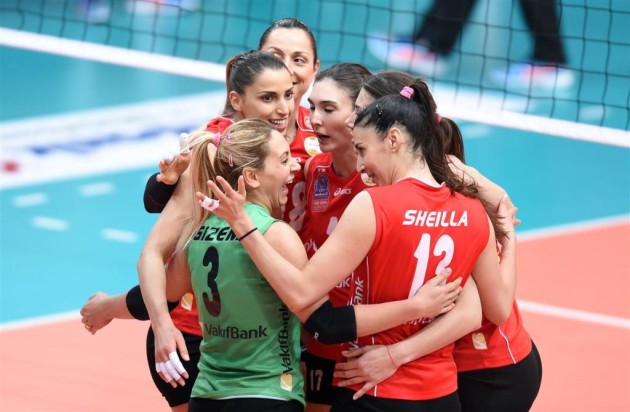 The first game of the big clash was simply fantastic. It has all started with a super exciting first set. Dinamo Kazan had a lead 18:14, but VakifBank made 6:1 run and took over the lead at 20:19! It was point for point all the way until 23:23, when Naz Aydemir touched the top of the net and Dinamo Kazan had the set ball. Russians failed to use the first one, but they used the second one. Carolina Costagrande had a bad reception, and Elena Yuryeva punished that with powerful spike – 26:24!

Turkish team had the lead in the third set almost for the whole time, but Dinamo Kazan approached to 21:19. Then a crucial point. A long rally eventually ended with a point of VakifBank and it was 22:19… A bit later it was 25:20. Away team had the lead by 2-1 in sets!

Then a set which might ruined the complete impression. VakifBank had the lead 18:14, but Dinamo Kazan made 8:2 run and went ahead at 22:20. Russian team failed to convert a set point at 24:23, then Vakif failed to use the match point at 25:24. It was all tied at 25:25 when it happened… According to referees next two plays of VakifBank were turnovers! Spikes of Carolina Costagrande and Sheilla Castro were called out, but both of them (especially the last one) might ended inside the court. But, there is no video check in Playoffs 12 of the Champions League and Kazan tied the game at 2-2 in sets.

A tie-break! VakifBank opened it with 4:0, Kazan approached to 6:4… That was the far as Russians got. Turkish side escaped again on 12:7, then Sheilla served an ace for 13:7… It was all over. Carolina Costagrande ended the game with a block-out – 15:7!

I agree. But, Vakifbank will advance to the next round anyway. Simply, much better team. Gamova could not do it by her own.