HalkBank has defeated Belogorie in the first match of the Playoffs 12! 3-1! Osmany Juantorena had a one-man show! 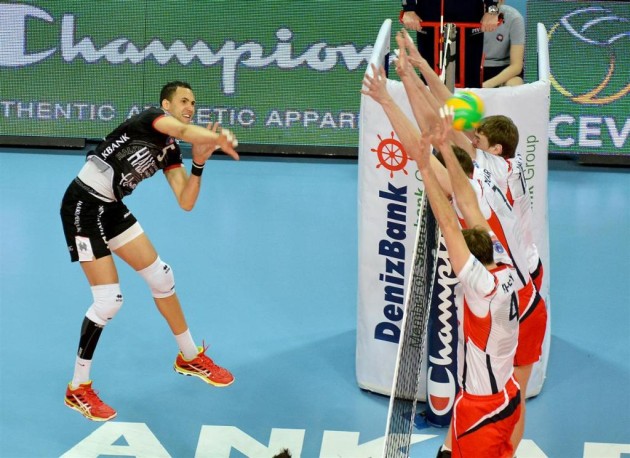 It was perhaps the most intense game of the Champions League in this season. Both sides have really given their best, and it is really petty that such volleyball giants had to meet so early in the competition.

However, Belogorie had an immediate reaction. Russians had even better set opening this time and escaped on 13:6. HalkBank just couldn’t catch up. The second set was over by a strong spike of Georgy Grozer – 25:20.

But, a true drama was on the way. It was such a close third set, and the result was tied at 23:23, when Sergey Tetyukhin made an ace! Set ball for Belogorie – 24:23. But, Osmany Juantorena was just too good this evening. Cuban star saved HalkBank with a powerful spike for 24:24, then Turkish block then stopped Taras Khtey for 25:24, and finally it was once again Juantorena. He was unstoppable in the counterattack and HalkBank won the third set – 26:24!

If you thought that the third set was the most dramatic you would be wrong. In the fourth set Belogorie had two set balls to take this match into the tie-break – 24:22. HalkBank saved the first one (24:23), and then Juantorena made the play of the day. He blocked Dragan Travica! Yes you read it correctly.  Italian setter tried to surprise rival’s defense with a “dump”, but Juantorena saw that coming and blocked that attempt for 24:24!

Belogorie failed to convert two more set balls afterward, and they just had to be punished for missing so many chances. Dmitriy Muserskiy spiked the ball into out and gave a match ball for HalkBank at 27:26. You can guess who ended the game. Juantorena with a pipe which stormed through Belogorie defense.

Belgorod deserved to be eliminated. Giving away 3 points to Fenerbahce was not a classy action against Paris team. I hope that Halkbank could take 2 sets in Russia and get rid of this snob team.

Snob team? You are talking abou European and Worls champion. So, be careful…

Belogorie came to take one set. They will beat HAlks in three sets in BElgorod.