VakifBank has won a tie-break thriller against Fenerbahce away, and perhaps made the crucial step in securing the pole position for the Playoffs! 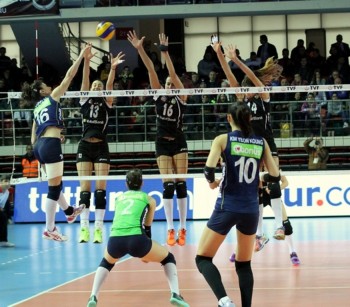 VakifBank entered this game without two very important players. Robin De Kruijf was not even in the protocol, while the starting libero Gizem Karadayi spent the whole game in the corner among substitutions. It is not clear whether the two players are injured or coach Guidetti just wanted them to be fresh for the Champions League rematch against Dinamo Kazan.

Anyway, their absence could be felt in the game of VakifBank in the opening set. Because, Fenerbahce simply dominated at the start of the derby. Yellow Angles were ahead by 8:5 at the first TTO, then 16:11 at the second TTO, while finally Kim Yeon-Koung put an end to the first set with a strong spike – 25:16.

Fenerbahce had the better opening of the second set as well, however this time VakifBank was just behind for the whole time. And, reigning champions of Turkey took the lead in the crucial moment. A strong block stopped Kim-Yeon Koung, and Vakif was ahead at 19:18. Couple of moments later Elitsa Vasileva scored from a counter-attack for +2, 21:19, while Naz Aydemir then blocked Lucia Bosetti for +3, 23:20. Sheilla Castro made an ace in the next serve for 24:20… Vakif used the very first set ball afterward. All tied at 1-1!

Squad led by Giovanni Guidetti had the better momentum and this was the outcome – it was 8:4 for VakifBank at the first TTO in the third set. However the margin then started to melt. In the finish of the set, away side was just one point ahead at 18:17, and then Kim Yeon-Koung began her show. Korean star made three points in a row, and put Fenerbahce in front by 2, 20:18! Just a bit later Yellow Angles had +3 when they blocked Milena Rašić for 23:20, while it was Kim, of course, who ended the set – 25:21. 2-1 for Fenerbahce.

But, it was far from over. The fourth set was all tied until 17:17, when VakifBank managed to take three in a row for 20:17! The last of them was pretty impressive, because Cagla Akin scored with a dig! The ball just bounced from her reception, and tricked all players of Fenerbahce. Home team tried to make a late comeback, but managed to approach only to 23:22. Naz Aydemir made the next two points on the same, extraordinary way – by being better than opponent’s middle blockers on the net! Both times she was stronger and smarter, and she managed to drop the ball into the Fenerbahce side of the court.  25:22, 2-2 in sets!

A tie-break was just unbelievably exciting. Vakif took the first big lead at 4:1, but then Kim Yeon-Koung made two aces in a row and Fenerbahce tied the game at 5:5! Couple of moments later Kim scored by receiving a service(!!!) as players of VakifBank thought that the ball will go into out – 7:7. It was point for point all the way until 11:10, when Fenerbahce managed to score two in a row and to take the lead at 12:11! But, Milena Rašić made a very important point for 12:12, and then Naz Aydemir made and ace for 13:12! Vakif had the lead again!

Polen Uslupehlivan tied the score at 13:13, but Sheilla Castro gave the first match ball to away side 14:13. And, Vakif used it, thanks to the mistake of Madelaynne Cicedo Montano. Colombian player spiked the ball out of bounds and it was over. VakifBank acquired a win which might give them the pole position for the Playoffs!

RUS M: Spiridonov – “Marichev was constantly running to referees, begging for something”