The return match of the Playoffs 12 starring Eczacibasi VitrA ISTANBUL and Agel PROSTEJOV coming up on Wednesday at the Burhan Felek Volleyball Hall will be preceded by a tribute to Özgecan Aslan, a 20-year old university student who was raped and eventually murdered last week in southern Turkey. 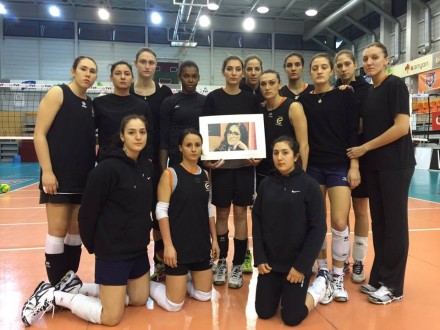 Aslan was last seen heading home on a minibus in the afternoon of February 11. Her body was found near the village of Çamalan, about 40 kilometres from Tarsus on Thursday. Aslan was killed and the body burned after she reportedly tried to resist a sexual assault. The murder has sparked public outrage, leading to mass demonstrations by women across Turkey over the past few days.

A series of actions against this act were organised also last weekend in conjunction with the matches played in Turkey’s Volleyball national league. A special banner was carried by the players of VakifBank Istanbul shortly before the start of their match with Fenerbahçe Grunding as the Volleyball family is joining a series of coordinated and more spontaneous protests.

As one of the pioneers in the promotion of women’s sport in Turkey, the club of Eczacıbaşı Vitra will use their home Champions League fixture with PROSTEJOV as an opportunity to pay their tribute to this young girl and to draw everyone’s attention on the ongoing campaign to end violence against women in Turkey. The players of Eczacibasi VitrA will therefore line up holding a banner with the script “Kadına karşı şiddete son!” which stands for “Stop the violence against women!”