HalkBank has qualified for the Champions League Playoffs 6 by winning the golden set against Belgorie in the rematch in Belgorod! Europe will have a new champion! 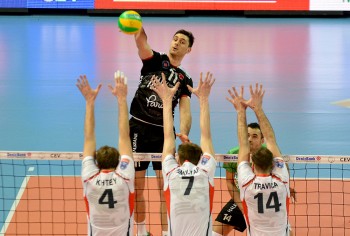 HalkBank simply had the perfect start and the finish of this match. The intersting fact is that Turkish team had only one single mistake in offense in the golden set! That was the only way to win against team such as Belogorie. Read the full report of the game.

At the very beggining, Turkish side managed to stop Georgy Grozer, the main attacking weapon of Belogorie, while at the same time the offense of the away team looked amazing. Osmany Juantorena, Tsvetan Sokolov and Michal Kubiak were unstoppable and the outcome was obvious. It was 14:9, then 20:13, while finally Marcin Mozdzonek blocked Dmitriy Muserskiy for 25:14 and 1-0 in sets for HalkBank.

But, everything has changed in the second set. Halkbank started making a lot of mistakes, while Belogorie “woke up” in the right moment. It was time for Dmitriy Muserskiy to block his rivals, while Georgy Grozer finally found rhythm in offense. Home team was up ahead by 8:4 at the first TTO, while it was 16:8 at the second… The only question was what would be the final margin. Eventually, Emre Batur sent the serve out of bounds and it was 25:17. In sets, all tied at 1-1.

The winner of the third set was decided already at its beginning. It was 2:2 when Taras Khtey made two consecutive blocks, then HalkBank made two turnovers, while finally Sergey Tetyukhin scored from a counter-attack for 5:0 run and 7:2 lead of Belogorie! Couple of moments later the margin was increased to 12:3, while at one point of this set home team even had +12 (22:10)! Like the previous set, this was also ended with a service mistake. Mikko Esko, who came in to replace Ulas Kiyak, sent the ball out of bounds and the final score was 25:16. Belogorietook the 2-1 lead in sets!

Halkbank needed that one more set to secure the qualification to the next round, and they made the first step toward that goal. Turkish side took the opening lead in the fourth set (5:2), but they were stopped right there! Taras Khtey firstly scored a point for 5:3, while then Dragan Travica made two consecutive blocks and the result was tied at 5:5! Dmitriy Muserskiy brought the first lead to Belogorie with a strong block for 8:7, but the crucial run of the home team started from 10:9. Sergey Tetyukhin scored twice in a row for 12:9, while then Georgy Grozer made three consecutive aces! 15:9!

HalkBank managed to save four set points and to approach from 24:18 to 24:22 but then… Another service mistake. This time Osmany Juatorena served into the net and Belogorie won the set by 25:22. 3-1! It was time for the golden set!

There, everything was tied until 6:6. After that, Dmitriy Muserskiy’s spike went out, while Sergey Tetyukhin got blocked in the next play and HalkBank escaped to 8:6! The margin remained the same until 10:8 when Gyorgy Grozer makes a mistake in spiking behind the 3rd meter line and it was +3 for the Turkish side – 11:8! Then Tsvetan Sokolov made two crucial points. Bulgarian opposite firstly blocked Gyorgy Grozer for 13:9, and then made the last spike on the game for 15:11! HalkBank advanced into the next stage!

Halkbank’s done a great job took the avenge and now another great game is waiting for us ZENİT-HALKBANK and also clash of stars Mikhaylov Leon Anderson, Juantorena Sokolov Kubiak…Halkbak will get through I think

Congratulations to Halkbank and Juantorena. We are leading 1-0 for Turkish-Russian volleyball war for now. By the way, shame on russian line judges and the tv regis, they were way too subjective.