Galatasaray, Ziraatbank and Arkas have joined HalkBank in the semi-finals of the Turkish Championship! 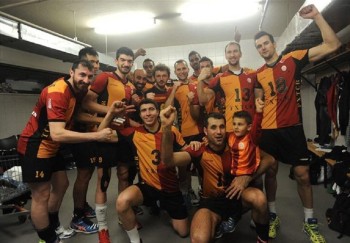 What a night it was for Galatasaray! In the third and decisive game of the quarter-finals, Istanbul Lions managed to break their biggest rivals in front of the away crowd!

Galatasaray won the first set after a big drama, however Fenerbahce answered immediately and tied the score at 1-1 in sets. The third set turned out to be the key of this game. With some great serves of Ivan Miljković, Fenerbahce managed to reach the first set ball at 24:23. However, the home side failed to use it, as well as the next one at 25:24. Then Galatasaray went ahead at 26:25 and had 4 spikes in a single point to seize the set! None of them was turned into the point and Marcus Bohme tied the score at 26:26.

But, Galatasaray got another chance. Red and yellows went ahead at 27:26, and then Melih Siratca blocked Miljković for 28:26! With the lead in the pocket, Galatasaray gained enormous amount of confidence and cruised through the fourth set toward the biggest win in the season. The Istanbul Lions closed the game with 3-1 and advanced to the semi-finals of the Turkish Championship.

There, Galatasaray will play against HalkBank, while the other pair is Arkas vs. ZiraatBank!

Arkas did not have problems against Maliye Piyango in the third game of the series, while ZiraatBank barely overpowered Istanbul BBSK, mostly thanks to amazing Antonin Rouzier who scored 32 points!