Despite being tired from exhausting CEV Champions League Playoffs 6 clash against Italian Cucine Lube Banca Marche Civitanova, Halkbank managed to achieve win in 20th round of the Turkish top division. 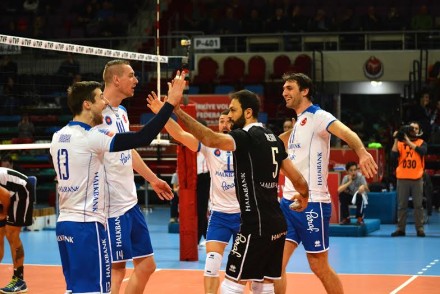 Thus, the team from Ankara secured top spot for the playoffs since they escaped Fenerbahçe and İstanbul Büyükşehir Belediyesi (İstanbul BBSK) on unreachable eight-point gap in the standings, two rounds before the end of the regular season.

Against Galatasaray HDI Sigorta , the coach of Halkbank, Lorenzo Bernardi, decided to rest his team’s engine, Italian Dragan Travica, who did not enter in the game. Burutay Subaşı was the best scorer in the winning team with 20 points.

Turkish champions Arkas Spor defeated Maliye Milli Piyango in straight sets with 22 points from Gökhan Gökgöz. He stood out in the absence of the Frenchman Antonin Rouzier, while Braziian Maurício Borges was playing only as back-up.

Ziraat Bankası remained in the battle for the fourth place in the table with Arkas. They downed İnegöl Belediyesi on road 3-0. The Swedish Marcus Nilsson had 20 points for Ziraat while the Cuban star Leonardo Leyva still did not get proper opportunity to show his quality. Once again, he was entering as substitute.