Statement from Tatyana Kosheleva on her Instagram profile about hostile atmosphere of the fans of Galatasaray Daikin İstanbul and their coach towards her end her teammates caused strong reactions on the other side. 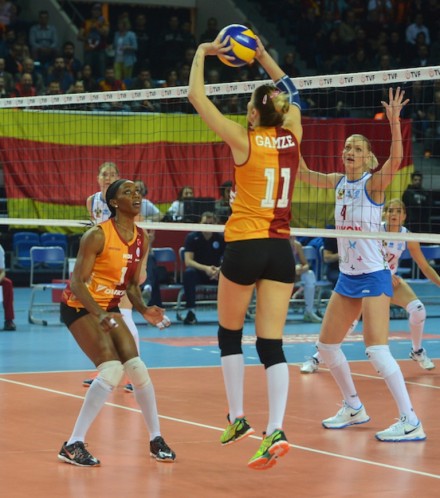 Specialized volleyball website from Turkey, voleybolextra.com, gave a different point of view than Kosheleva as well as coach of Galatasaray, Ataman Güneyligil, who was accused of showing inappropriate gestures to Kosheleva.

„Voleybol Extra“ emphasized that Kosheleva was sitting next to statisticians, by the court, instead of being at the stands since she has not been in protocol due to injury.

Thus, she was taking advantage of the situation, revealing tactics of Galatasaray to her coaching staff and caused tensions in the gymnasium.

This was a main trigger for the fans which only responded to Kosheleva and players of Dinamo Krasnodar. Turkish media cocluded that it was not clear how CEV officials and referees allowed her to sit so close to the game.

What Güneyligil, the coach og ’Galata’, wrote on his Twitter profile was similar.

„They (Krasnodar coaching staff) poured water on the court to interrupt the match, gave away my tactics to their players by using signs. I condemn this kind of fair-play violation from my opponents,“ were Güneyligil’s words.

CEV CUP W: Check out part of the atmosphere from Istanbul (VIDEO)

Is it forbidden to use signs to give infomation from coaching stuff to players? Do U really think that fans were angry about Kosheleva’s sitting place? Coach who are U? U know the rules?

Kosheleva was too polite not to criticize the mistakes in favor of the home team made by the main referee of this match. The one that deserved the status that ‘violated fair-play’ should be someone else, not Kosheleva. Just saying