Bulgarian captain Vladimir Nikolov turned the score in the last set for a beautiful 3:0 win of Galatasaray over Gemushane Torul. His huge experience and attacking power played for the victory of Nikolov's famous new Turkish team. 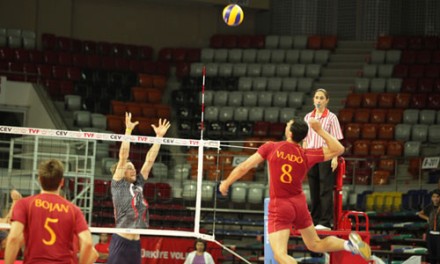 Wednesday, 26.09.2012, was the opening day of the Paidar Demir Erkekler Volleyball Tournament runnung for 5 days from 26 to 30 September 2012 in the Baskent Volleyball Hall, Ankara, Turkey. The competition is played in the honouring memory of the famous Turkish volleyball player Paidar Demir unfortunately died in a car crash in 2006 at the early age of 46.

Galatasaray are the organizers of the tournament and have all their matches scheduled the last starting at 17,30 pm local time. The opening match for Galatasaray against Gemushane Torul was actually a very good training experience for the young players of the popular Istanbul volleyball club. All the new foreign transfers and main players of Galatasaray supperted their younger teammates outside the volleyball court: Vladimir Nikolov – main opposite and captain of the Bulgarian national team for more than 10 years, Teodor Salparov (Tedy) – main libero of the Bulgarian national team for more than 5 years, Ulas Kiyak – main setter of the Turkish national team as well, Erhan Dunge – main middle blocker of the Turkish national team. After very well played first two sets for 2:0 the young team line-up definitely started losing with some huge lead for their oponents. That’s why Galatasaray’s head coach Dragan Nesic (who was very successful with the women of Galatasaray last year) decided to put in play his main bomber Vladimir Nikolov giving him the tactic goal for dominating success. A wonderful single block and several successful attacks of the powerful Bulgarian captain were actually his decisive word on the court for a very quick and very beautiful turn of the score in the very end of the last third set.

Spectators and volleyball specialists in the beautiful Baskent volleyball hall definitely feel the absence of three very important names and main forces in the Turkish volleyball league. The Turkish champions Fenerbahce (Istanbul) and the strong team of Arkas (Izmir) are still in Poland competing at the tournament in the honouring memory of Jan Strzelczyk. The Ankara volleyball club Halkbank have a very strong new selection for the new season but their team could not compete at the Paidar Demir Erkekler Volleyball tournament due to scheduled friendly matches abroad.

ITA M: Serie A1 revolutionized enters into the new season