Eczacibasi VitrA ISTANBUL is gearing up for its first home match in the prelims of the 2013 CEV Volleyball Champions League after scoring a 3:1 away win in Poland against Tauron MKS DABROWA GORNICZA. Read latest volleyball news on Worldofvolley.com. 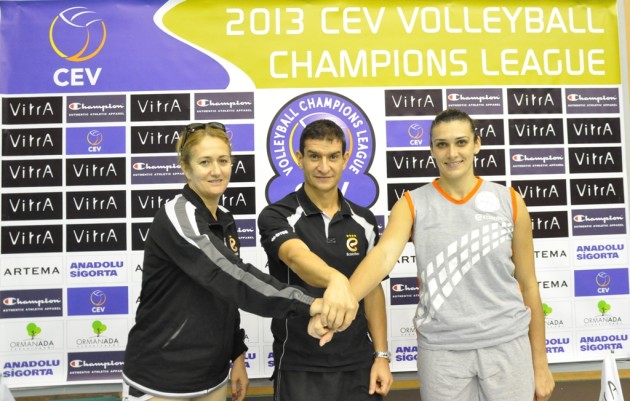 A press conference specifically devoted to this European campaign was held on Saturday right after completion of the first match played in the national league and that ended in a speedy 3:0 win over Nilüfer Belediyesi. “We have started putting together the group for this season” says head coach Lorenzo Micelli. “We have great players in the roster who belong to the world’s elite in their position and by adding some other to the group we had last year we hope to achieve some more great results and fulfill our goals. We have just won the Supercup and that was a good start, so I believe that step by step we will be able to live up to all expectations. We would like to play the tenth European final in the history of our club and we definitely want to win the Champions League this year”.

“Our preparations for this season ran extremely well and winning the Supercup did evidently boost our motivation” adds captain Esra Gümüs. “I have been part of many successes with this club and right now we are the titleholders of the national league, national cup and Supercup. The only trophy that is still missing in our collection is the Champions League and we definitely want to add it to the showcase of Eczacibasi Sports Club by the end of this season”.

“We have been missing the competition and I expect this season to be as exciting as the past one. We are proud of our performances in the domestic competitions but the Champions League really means a lot to all of us. We have very good players and the right team spirit, but the first goal is to finish on top of our preliminary group” concludes team manager Nalan Ural.

This is the eleventh appearance of Eczacibasi in the CEV Volleyball Champions League and the Turkish side has made it to the final four three times, in 2001, 2002 and 2009. In comparison with last year, the roster has been strengthened with the addition of setter Özge Cemberci Kirdar, of Russian superstar Lioubov Shashkova and Serbian Aleksandra Petrovic.

To read the latest news from Turkey click here.