CEV CL W: Eczacibasi makes it six in a row after close match with Tauron MKS

Eczacibasi VitrA ISTANBUL rounded out their campaign in the prelims of the 2013 CEV Volleyball Champions League scoring a sixth consecutive victory as they edged on Tuesday Tauron MKS DABROWA GORNICZA 3:1. 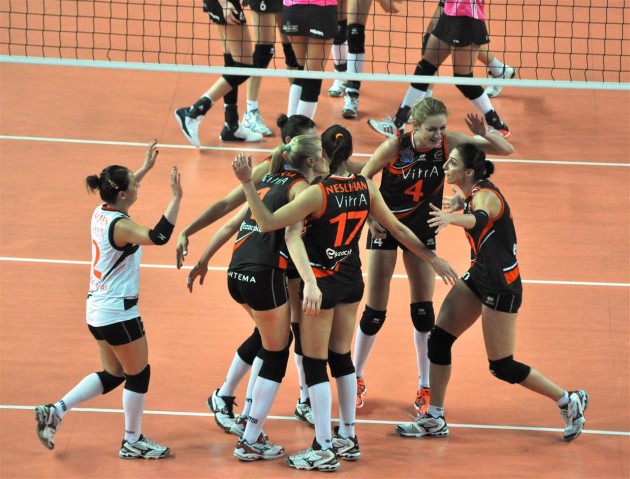 Eczacibasi was missing Lioubov Shashkova and Maja Poljak for the last match of the prelims, but they still started out by imposing their pace (10:7) before Tauron MKS drew level at 11 all. It was then Özge Cemberci Kirdar who opened the gap once again for the home side (15:11) but Tauron fought back eventually tying the score at 21 and then going to the front after the next rally. After a time-out asked by head coach Lorenzo Micelli, Eczacibasi drew the score with an attack killed by Neslihan Darnel but the final rush fully belonged to DABROWA GORNICZA that anchored by an excellent performance of Joanna Kaczor – who scored 8 points in this set – pocketed the final 23-25.

The guests stretched momentum into the early phases of the second set where they went up 5:8 and even 7:11; Eczacibasi captain Esra Gümüs propelled the comeback of her side (11:11) but the local heroines were still struggling to find their best play (11:14). After trailing by four points at the second technical time-out and again at 16:20, Eczacibasi stormed back via the contribution of its stars, Darnel and Cemberci. The head coach of Tauron MKS, Waldemar Kawka, tried to stop that run via a double substitution – Sliwa replacing Dirickx and Zaroslinska for Kaczor – but Eczacibasi moved the score from 20 all to 24:21 to bring it home after another close final rush (26-24).

Knowing that the chances to make it to the Playoffs 12 were almost gone, Tauron MKS played with no pressure in the fourth set and immediately found the right pace, going up 0:5 and 3:8. It took a few minutes for Eczacibasi to claw back and draw level at 11 before moving to the front by the second mandatory stop (16:12). Tauron MKS wasn’t ready to surrender and leveled the count at 18 all and once more at 20; after another tie at 23, Gümüs pocketed a match ball and the second opportunity to finish it off was cashed by a terrific spike killed by Neslihan Darnel (26-24) who did total 31 points in the game. On the other side of the net, Joanna Kaczor was the most prolific with 25.