As more than 20’000 people have voted for Berlin’s athletes of the year 2012, BERLIN Recycling Volleys experienced an overwhelming outcome, being awarded the third rank in the team 2012. The focus, however, is on tomorrow’s match against Jihostroj CESKE BUDEJOVICE. 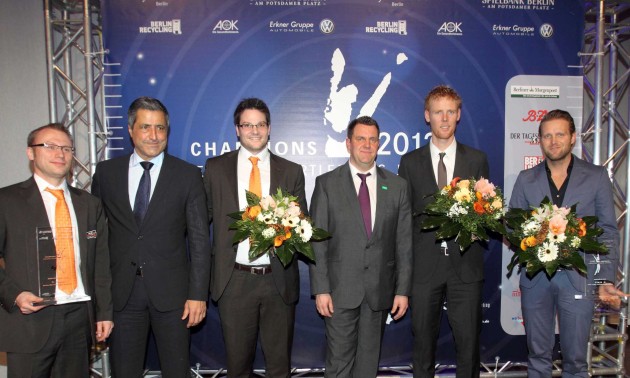 “Simply being nominated among the other top-notch sports teams of the city of Berlin has been a great honor for us. Having made it under the top three teams in town is just phenomenal – and also a great appreciation of years of work”, club president Kaweh Niroomand says, himself awarded the fourth rank in the election of the coach/manager of the year. “The great number of votes shows that Volleyball in Berlin already enjoys immense public attention”, he adds.

With 13.91 percent of the votes the 2012 German national champion was ranked third behind “EHC Eisbären” (ice hockey, 20.30 %) and the 2012 Beach Volleyball Olympic Champions Julius Brink/Jonas Reckermann (15.02 %) who made Volleyball in general to one of the big winners of the evening. Head coach Mark Lebedew got the sixth rank and completed the overall great result for BERLIN Recycling Volleys as they left behind well-known sports teams such as “Füchse Berlin” (handball) and ALBA Berlin (basketball).

Facing Jihostroj CESKE BUDEJOVICE for the last match of the prelims of Europe’s most elitist competition, the team’s focus undeniably lies on tomorrow’s match in Czech Republic.  Having scored a sensational 3-1 win against the Russian standout and clear-cut favorite in Pool B, Lokomotiv NOVOSIBIRSK, the side of BERLIN needs one victory to be definitely qualified for the Playoffs. Despite the 3-0 win at the very start of this year’s prelims the team of the Australian mentor Mark Lebedew does not take the match too easily: “CESKE BUDEJOVICE aimed for the second rank of the group before the start of the season. And even though this objective can’t be achieved anymore, they will be highly motivated to perform well at their last home match – especially as they still have the chance to qualify for the Challenge Round of the CEV Volleyball Cup. We have to watch out and focus on our goal to make it to the Playoffs”, the coach says. “If we win, we’re through– that’s the best motivation for us.”

CEV CL W: Eczacibasi makes it six in a row after close match with Tauron MKS